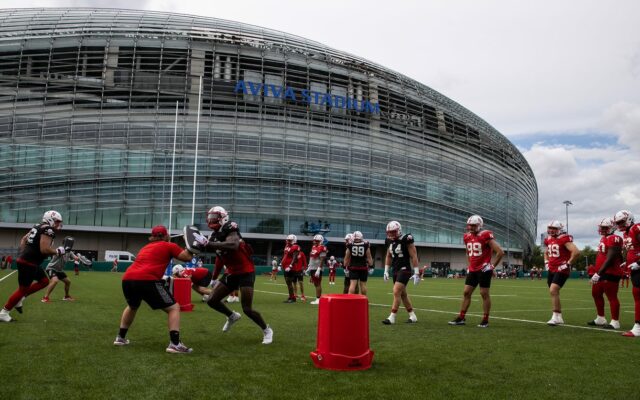 DUBLIN, Ireland–(NU Athletics Aug. 24)–After arriving in Ireland on Tuesday morning, the Nebraska football team held its first practice on the Emerald Isle Wednesday. The Huskers worked out for approximately two hours in Dublin just outside of Aviva Stadium, the site of Saturday’s season opener against Northwestern.

Defensive coordinator Erik Chinander met with the media after practice and talked about awarding Blackshirts.

“They were hanging in their lockers today when they got there,” Chinander said of the Blackshirt jerseys. “Hopefully there will be a few more. The guys that got them, they deserved it, and they’ve earned those Blackshirts.

Chinander was asked about two players – Buford and Feist – who were first-time Blackshirt recipients.

“I thought Marques could have played last year. I would have felt comfortable putting him in the game,” Chinander said of Buford, who primarily had a special teams role in 2021. “This year, he’s done everything he’s supposed to do. He’s done everything right. He’s really deserved one.

“Colton Feist has done it the hard way. He’s a walk on from Yutan, Nebraska. He’s had to work hard at it. He kept fighting and kept getting better and kept grinding, and he’s really proved that he belongs. He’s proved that he should be out there with the ones right now.”

Aside from the excitement of being in Ireland and the awarding of the Blackshirts, Chinander said Nebraska had a good practice on Wednesday, and he is looking forward to Saturday’s season opener.

“I want to see if these guys are who I think they are,” he said. “By that I mean, will they play as hard as they have, can they step it up a bit? I want to see big-time effort. It should be a great atmosphere. Some of these guys are starting their first game, so we’ll see how they operate.”

On the other side of the ball, offensive coordinator and quarterbacks coach Mark Whipple talked about his position group and what he’s looking for from Casey Thompson on Saturday.

“Taking care of the football and being a leader but the leadership comes from your play and not from your mouth,” Whipple said. “It’s a really good (quarterback) room. We have good kids that care and work hard and really help one another. They’ve been fun to be around, and it’s obviously a lot more fun when you win.

Nebraska continues preparations for Saturday’s Aer Lingus Classic with another practice on Thursday. Head Coach Scott Frost will address the media following practice. Kickoff between Nebraska and Northwestern is set for 11:30 a.m. (Central) on Saturday, with television coverage on FOX.