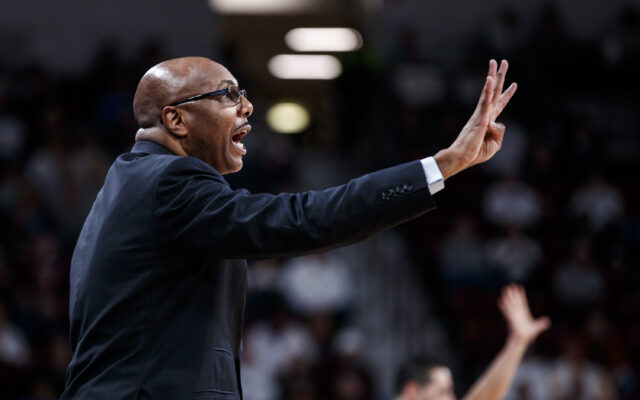 LINCOLN–(NU Athletics Aug. 17)–Nebraska Men’s Basketball Coach Fred Hoiberg announced Wednesday that Ernie Zeigler will join the Husker coaching staff.  Zeigler bring more than two decades of Division I experience to Nebraska, including six seasons at Central Michigan as a head coach. He spent the last seven years at Mississippi State, helping the Bulldogs to four postseason appearances between 2018 and 2022 under Ben Howland.

Zeigler also served as an assistant coach at Kansas State, Bowling Green, Pitt, UCLA and Detroit and has made eight postseason appearances as an assistant coach, including five NCAA Tournament trips. The 2005-06 UCLA team was the NCAA runner-up, while the 2001-02 and 2002-03 Pitt squads secured NCAA Sweet 16 appearances. He also played a role in a trio of regular season conference championships and a pair of conference tournament titles.

“When I began looking at candidates, Ernie checked all the boxes that we were looking for,” Hoiberg said. “He has a proven track record in player development and has helped build several successful programs in power conferences. He also has the experience of running his own program for several years. Ernie is also an outstanding recruiter who has extensive ties in the Big Ten region. I think he is a good fit with staff we have in place, and I am excited to have him join our program.”

During his tenure at Mississippi State, the Bulldogs ranked sixth in the SEC in wins since 2018, recording at least 18 wins in each of the past five seasons. MSU made four consecutive postseason appearances, including the 2019 NCAA Tournament and an NIT runner-up finish in 2021. In 2020, the Bulldogs tied for fourth with an 11-7 mark, its best SEC finish since 2010-11.

Zeigler was a driving force in Mississippi State’s frontcourt development with the recruitment of Abdul Ado, an ESPN top 100 player. Ado, a 2020-21 All-SEC Defensive Team pick, finished his MSU career tied for second place on the program’s blocks list. Zeigler helped the Bulldogs recruit three classes in the top 25 nationally by 247Sports, including the nation’s No. 10 class in 2016.  During his MSU tenure, four players, Reggie Perry, Craig Sword, Quinndary Weatherspoon and Robert Woodard II, reached the NBA

Before spending two seasons at Detroit under Ray McCallum from 2013 to 2015, Zeigler was the head coach at Central Michigan. He spent six seasons with the Chippewas and led the program to two Mid-American Conference Western Division crowns and a pair of Michigan MAC trophies which is given to the school who has the best head-to-head record among in-state schools.

Central Michigan reached the MAC Tournament quarterfinals in four of his six seasons and logged top three MAC division finishes during five of his six seasons with Zeigler at the helm. His recruiting classes to Mount Pleasant were ranked atop the conference four times overall, ignited by three straight seasons from 2009 to 2011 by HoopScoopOnline.com. Zeigler mentored eight players to All-MAC selections highlighted by six players who went onto play professionally.

The Panthers claimed a share of the 2002 and 2003 Big East regular season titles and won the 2003 Big East Tournament crown. Pitt climbed as high as No. 2 for four weeks in both the Associated Press (AP) and USA Today/Coaches Top 25 polls before closing the season at No. 4 by the AP in 2002-03.

When Howland headed west to UCLA, Zeigler helped build the program back into a national title contender. In 2005-06, the Bruins swept the Pac-10 regular season and tournament titles in 2005-06 and advanced to the NCAA Final Four as the No. 2 seed before falling to Florida in the 2006 NCAA Championship Game.  UCLA posted a top 15 recruiting class each season and inked three McDonalds All-Americans with Zeigler on the staff. The 2004 class was ranked as high as No. 4 by Rivals.com whereas the 2006 class checked in at No. 6 by FOXSports.

Zeigler had one-year stints at Kansas State and Bowling Green prior to teaming up with Howland. He began his coaching career under his former prep coach, Robert Menefee, at his alma mater, Detroit Cody High School.

From 1990-96, the Detroit Cody program dialed up a top 10 ranking in the state of Michigan during four of his six seasons. The team reached the state quarterfinals in 1992 and won the Detroit Public School League West Division championship in 1993. Zeigler also led Team Detroit in the AAU ranks from 1992 to 1997. He guided all six squads to the Michigan AAU Final Four, and the 1994 team reached the national AAU quarterfinals. In 1995 and 1997, Team Detroit advanced to the Adidas Big Time Tournament quarterfinals.

Zeigler made the move overseas where he gained three seasons of head coaching experience from 1997 to 1999. He led the Henan Wildcats from 1996-97 and was tabbed the Chinese National Basketball Alliance International Coach of the Year in 1997. The Wildcats came away with the franchise’s first winning season and first playoff berth in club history.

Zeigler received a bachelor’s degree in business management from Cleary College in 1994. He played collegiately for Schoolcraft College in Livonia, Mich., from 1984 to 1986 before moving onto Armstrong Atlantic State University in 1986-87 and Northwood University in 1987-88.

Zeigler and his wife, Seantelle, have two children: Trey and Skylar.