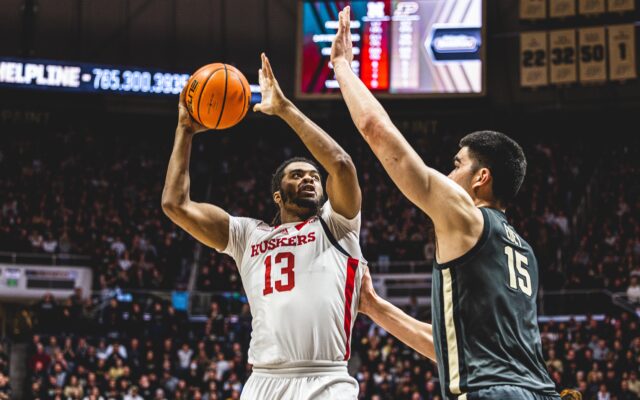 Nebraska (9-9, 2-5 Big Ten) was without two of its three leading scorers, as Juwan Gary (shoulder) and Sam Griesel (hip) missed Friday’s game because of injury.

Walker carried the offensive load in the loss, finishing with 19 points on 9-of-15 shooting and added six rebounds and four assists, while Keisei Tominaga added 16 points, including four 3-pointers.

Fletcher Loyer led all scorers with 27 points, while Zach Edey posted a double-double with 12 points and 13 rebounds. It was Edey’s second-lowest total of the season, as NU held the 7-foot-4 center to 11.5 points per game in the two regular-season matchups

Purdue seized the opening minutes of the second half, out-scoring Nebraska 11-0 in the first 3:44 of the half to build a 46-24 lead.

The Huskers got to within 17 on a couple of occasions, the last coming on Walker’s basket with 5:39 left to make it a 64-47 game. Edey’s 3-point play and a basket by Braden Smith pushed the margin to 22 with 4:00 remaining and forced a Husker timeout. NU eventually got to within 70-55 on Emmanuel Bandoumel’s 3-pointer with 1:58 remaining, but could get no closer.

Purdue got off to a quick start behind the shooting of Loyer, who had 12 of his 16 first-half points in the first eight minutes as the hosts built an early 15-4 lead. Nebraska, which shot 45.8 percent in the opening 20 minutes, began to chip away behind the play of Derrick Walker. The 6-foot-9 senior had 13 of the Huskers first 15 points, capped by his first career 3-pointer which pulled NU within 21-15 with 5:27 left in the half.

Nebraska did an outstanding job on Edey throughout most of the first half, holding him scoreless for the first 15 minutes until a putback dunk with 4:41 left in the half got him on the scoreboard. The Huskers pulled to within 29-24 after a Keisei Tominaga 3-pointer with 2:23 left, but Purdue scored the final six points of the half to take a 35-24 lead into the locker room

The Huskers return to action on Wednesday, Jan. 18, as they host the Ohio State Buckeyes.