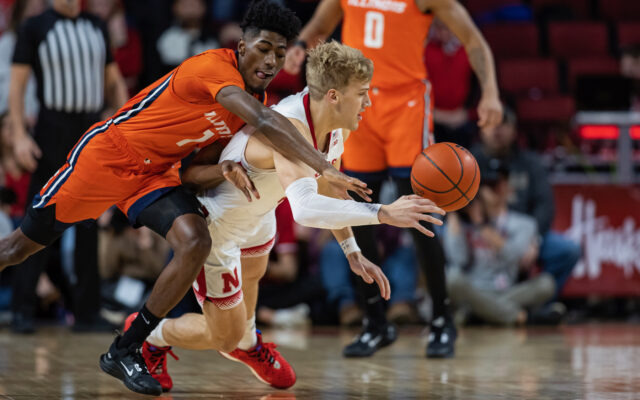 Terrence Shannon Jr. led five Illinois players in double figures as he finished with 25 points and 11 rebounds. The Fighting Illini shot 45.9 percent from the field and held Nebraska to 37 percent shooting to improve to 11-5 overall and 2-4 in the Big Ten.

Nebraska made one last run behind Breidenbach, who scored eight straight points to get NU with 55-45 with 9:09 left. The Huskers eventually pulled to within 59-49 as Derrick Walker’s 3-point play with 6:20 remaining capped NU’s 14-4 run and got the Pinnacle Bank Arena crowd back into the game.

Illinois answered as a RJ Melendez putback and a steal and dunk from Shannon pushed the margin back to 14, and NU was unable to slice into the deficit.

Early on, it was a defensive struggle neither team could get going offensively. NU led 7-5 after a Juwan Gary 3-pointer with 14:03 left in the half, but Illinois ran off nine straight points over a 3:16 span to take a seven-point lead, at 14-7. Consecutive layups by Greisel and Keisei Tominaga got NU within three, and Nebraska was within 25-20 with 3:52 left in the half before Illinois made a run.

Griesel led NU with 12 points and added six rebounds, while Breidenbach scored all 11 of his points in the second half after battling foul trouble in the opening 20 minutes.

The Illini scored nine of the last 12 points of the half to build a 34-23 halftime lead. NU held Illinois to 33 percent shooting in the first half, but the visitors hit 10-of-16 from the foul line in the opening 20 minutes.

Nebraska will travel to West Lafayette on Friday, Jan. 13, to take on No. 3 Purdue at 6 p.m. (CT). The game will be televised on the Big Ten Network.