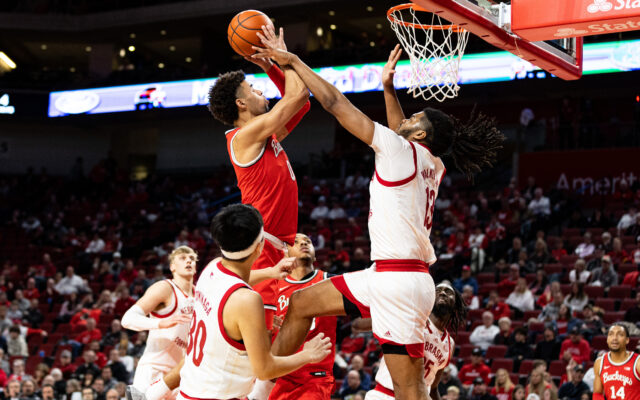 LINCOLN–(NU Athletics Jan. 18)–Sam Griesel scored 10 of his game-high 15 points in the second half, as Nebraska used a balanced attack and held Ohio State to 36 percent shooting in a 63-60 victory Wednesday evening at Pinnacle Bank Arena.

While Griesel kept the Huskers (10-9, 3-5 Big Ten) within striking distance early, it was some unsung heroes that gave Nebraska a hard-fought win.

The Huskers trailed 49-47 with 8:55 remaining before Denim Dawson’s basket keyed a decisive 8-0 run for the hosts. Jamarques Lawrence’s 3-pointer gave NU a 52-49 lead it wouldn’t relinquish before an Emmanuel Bandoumel basket and a Wilhelm Breidenbach free throw put NU up 55-49 with 5:14 left.

The game featured 13 lead changes and eight ties as neither team led by more than six points the entire evening.

The Huskers held OSU (10-8, 2-5) without a field goal for over six and half minutes down the stretch and hit just enough free throws in the final two minutes to earn a second straight win over the Buckeyes.

In addition to Griesel, who grabbed seven rebounds, Keisei Tominaga had 11 points while Derrick Walker added 10 rebounds and eight points before fouling out.

Both teams struggled in the first half, as Ohio State took a 22-21 lead at the break. The Huskers shot 30 percent from the field, while holding OSU to 27 percent shooting in the opening 20 minutes.
Nebraska led for most of the half and built a 21-15 lead on Lawrence’s basket with 3:12 left, but Sensabaugh, who was held without a field goal for the first 17 minutes, scored five straight points as
part of a 7-0 spurt to close the half, taking a one-point lead on McNeil’s jumper.

To start the second half, both teams traded 4-0 runs before a three pointer from Tominaga and seven-straight points from Griesel put the Huskers up, 36-33. OSU responded again, using six-straight points from Key to take a 38-36 lead. Neither team led by more than two points until Nebraska’s 8-0 run with under 10 minutes remaining.

Nebraska travels to University Park to take on the Penn State Nittany Lions on Jan. 21. Tipoff is set for 1:15 p.m. (CT), and the game will be televised on the Big Ten Network.