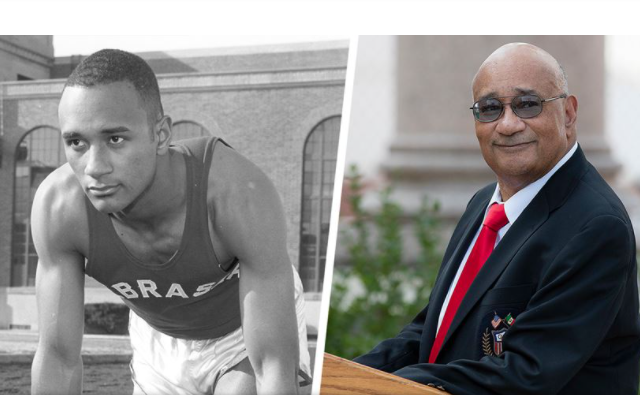 Greene was a six-time national champion on the track for the Huskers during his career from 1965-67, winning the most NCAA titles of any Nebraska male track and field student-athlete. Greene, who was inducted into the first Nebraska Athletics Hall of Fame Class of 2015, won three straight 60-yard dash titles at the 1965, 1966 and 1967 NCAA Indoor Championships, and he was also the NCAA outdoor champion in the 100-meter dash in each of those years. The first Husker to successfully defend an NCAA title in any sport, Greene was also a seven-time All-American and 11-time conference champion. To this day, Greene holds Nebraska school records in the 50-yard dash, 60-yard dash and 100-meter dash.

A former world record holder in the 100-meter dash, Greene was a two-time U.S. Olympian. In 1968, Greene was a member of the U.S. 4×100-meter relay team that won the Gold Medal with a world-record time of 38.19. After winning the first Gold Medal by a Husker student-athlete in the history of Nebraska Athletics, Greene became NU’s first student-athlete to win multiple Olympic medals when he added a Bronze Medal in the 100-meter dash despite injuring his hamstring. In 1992, Greene was inducted into the USA Track & Field Hall of Fame, and he is also a member of the U.S. Olympic Hall of Fame.

“We are deeply saddened to hear of the passing of Charlie Greene and our thoughts and prayers are with his wife, Linda, and his entire family,” said Dr. Lawrence Chatters, Executive Associate AD for Diversity, Equity and Inclusion at the Nebraska Athletic Department and friend of Greene. “Charlie exemplified what it means to be a Husker. He was an amazing student-athlete while here at Nebraska and then went on to serve his country honorably in the United States Army. Charlie was a personal friend and mentor to me and many others, and he will be missed dearly.”

Greene was a graduate student when he became a member of the U.S. Track and Field team. After the Olympics, he returned to the University of Nebraska-Lincoln to finish his degree. During his military career, Greene served in the ROTC, in the military’s equal opportunity and race relations programs and as coach of the All-Army Track team. He was stationed in West Point, New York and West Berlin, Germany, and rose to the rank of major. After a 24-year career, Greene retired from the army and worked for Special Olympics International in Washington, D.C., before returning to Lincoln, Nebraska, where he spent six years working in student affairs for the university.

Greene remained a big part of the Lincoln community throughout his life, as he trained high school track and field athletes, volunteered for the Husker Life Skills program, and enjoyed being part of Nebraska’s Athletic Department community and a supporter of all Husker student-athletes.

Denny Walker, a teammate of Greene’s at Nebraska from 1965-67 and lifelong friend, said in addition to being an incredible athlete, Greene was a loving person, a family guy, and a loyal, dedicated friend.

“Charlie’s very favorite place was the University of Nebraska. It meant more to him than anybody that I know. You’d call his phone back in the day, and on the answering machine he would say ‘No one’s home, Go Big Red!’ I felt honored to be on a relay team with the fastest man in the world. He helped me fulfill my dream.

“One of his favorite things was to go down to the University and sit and talk to the athletes. He’d be so proud when an athlete would perform beyond what they’d ever done. He felt so good about helping those kids become the people they had become.

“In his backyard, he had a setup for kids to learn how to sprint the 40-yard dash, and Charlie would help get athletes two-to-three-tenths of a second faster. It didn’t matter who you were or what sport you played, there was nothing he enjoyed more than helping kids become better athletes and people.”

“I’d come down and pick him up at Tabitha and take him to track meets,” Walker said. “He just loved it so much. We had talked about going to a football game this fall. He had the will to live and still wanted to go. If Nebraska lost a football game, he’d be thinking of a way they could do better and win. He was endless about Nebraska.”