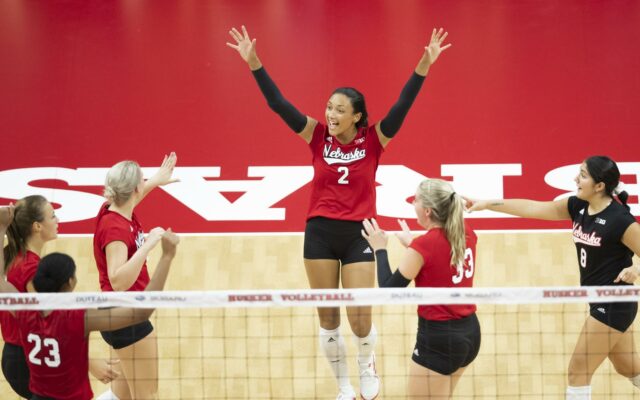 The Huskers (2-0) continued to roll as they hit .318 to gather their second win of the Ameritas Players Challenge. Their defense was also stout as they held the Golden Hurricane to a .038 hitting percentage.

Whitney Lauenstein had a career-high 15 kills on a blistering .429 hitting percentage. Madi Kubik, who hit .414, tallied 14 kills to notch her second double-digit kill total of the day. She also had eight digs and three blocks. Kaitlyn Hord added eight kills and five blocks, while Ally Batenhorst finished with seven kills. NU had 47 kills to just 21 for Tulsa.

The Huskers changed out three starters in the lineup from Friday morning, led by setter Anni Evans who had 36 assists and 10 digs. Libero Lexi Rodriguez was all over the court, tallying a match-high 16 digs while also dishing out six assists.

Nebraska had a 9-2 advantage in blocks, led by Hord’s five. Freshman Maggie Mendelson had four in her first collegiate appearance.

Nicklin Hames, who moved to No. 6 all-time for Nebraska in digs earlier on Friday, had 11 digs against Tulsa to go with a pair of service aces. The Huskers had a 59-41 edge in digs.

Set 1: Three straight kills by Lauenstein and Kubik put NU ahead 5-1. The Golden Hurricane rallied with a 4-0 run to tie the set at 5-5 before Lauenstein terminated her third kill of the set. But Tulsa got three kills to go ahead 9-7. Batenhorst and Kubik had kills, and Hord teamed with Evans for a block before posting a kill of her own to make it 11-10 Huskers. Batenhorst added another kill and Lauenstein followed to increase NU’s lead to 13-10. Hord and Lauenstein recorded back-to-back kills to take the Huskers to a 15-11 lead at the media timeout. After the timeout, Lauenstein killed four more points to carry the Huskers to a 19-12 lead. The sophomore from Waverly then combined with Mendelson for a block to make it 21-12 via a 4-0 run. The Huskers won 25-15, ending the set on an 18-6 run. Lauenstein had nine kills on .750 hitting. NU outhit Tulsa .385 to .062.

Set 2: Kubik posted two kills and was in on a block with Hord as the Huskers sprinted out to a 6-1 lead. Kubik and Lauenstein tacked on two more kills before back-to-back aces by Hames and a solo block by Mendelson made it 13-3. Kubik tipped a kill and Mendelson hammered two straight from the right side to extend the Huskers’ run to 7-0 and make it 16-3. The Nebraska onslaught continued as Batenhorst and Kubik put down two more kills for a 19-6 advantage. Hord took a turn with a pair of kills, and Kubik added her 12th of the match before an ace by Rodriguez gave the Big Red set point at 24-12. A block by Kubik and Mendelson ended the set at 25-12. The Huskers hit .375 in set two and held Tulsa to .083.

Set 3: The third set began exactly as the second did with Tulsa scoring the first point and the Huskers scoring the next six. Batenhorst had two kills for the Big Red. This time, though, the Huskers continued their run after a Tulsa timeout. Batenhorst terminated twice around a block by Hord and Lauenstein, and the Huskers led 9-1 as Tulsa used its final timeout of the set. Nebraska pulled away for the 25-13 win to clinch the sweep, its second of the day.

Up Next: The Huskers conclude the Ameritas Players Challenge on Saturday at 7 p.m. against Pepperdine.