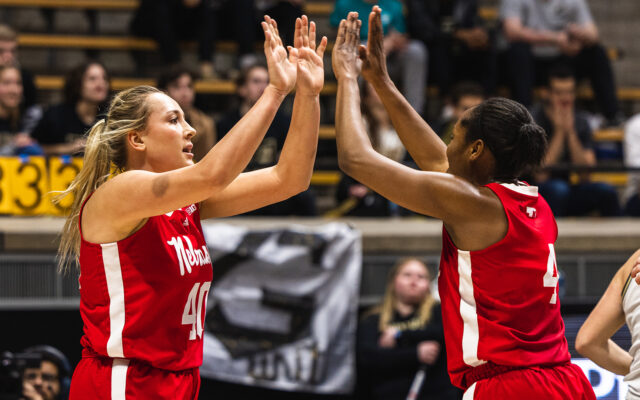 WEST LAFAYETTE, Ind.–(NU Athletics Jan. 18)–Alexis Markowski dominated the fourth quarter on her way to a double-double with 19 points and 10 rebounds to power Nebraska to a 71-64 come-from-behind Big Ten women’s basketball win over Purdue at Mackey Arena on Wednesday.

Markowski, who scored 11 of her team-high 19 points and added six rebounds in the fourth quarter alone, fueled a 23-8 surge by the Big Red in the final period that helped Nebraska improve to 12-7 overall and 4-4 in the conference. Purdue slipped to 12-6 overall and 3-5 in the league.

Maddie Krull, who did not start for the first time in the past 11 games because of illness, came off the bench to pour in 15 points while adding three rebounds and a pair of steals. Sam Haiby was consistent for Nebraska from start to finish, adding 14 points, four rebounds, three assists and three steals while playing a season-high 32 minutes.

The Huskers also got big contributions from freshman Callin Hake, who scored eight points and added three rebounds while making her first collegiate start in place of Krull. Kendall Moriarty added eight big points of her own, including a huge fourth-quarter three-pointer that put the Huskers in position to seal the game down the stretch.

Nebraska’s defense took center stage on the road as well, holding the Boilermakers to just one field goal in the final six minutes to turn a 60-55 deficit into a seven-point win. Moriarty’s three cut the margin to 60-58, before back-to-back buckets by Markowski not only tied the game but gave the Huskers their first lead of the second half at 62-60 with 4:32 left. Moments later, Krull connected on another huge three-pointer to put NU up 65-61 with 2:47 left.

Markowski then came through again at the rim to give Nebraska a 67-61 edge, before Jeanae Terry ended Purdue’s field goal drought with a three-pointer with 38.6 seconds left. But the Huskers made the plays down the stretch and Jaz Shelley sealed the victory with four straight free throws in the final 25 seconds for her only points of the night.

Abbey Ellis led Purdue with 20 points, including 17 in the first half, while Caitlyn Harper contributed 15 points. Jayla Smith added 11 points off the bench in the loss. Terry added eight points and eight rebounds.

In an evenly played first half, Purdue took a one-point lead to the locker room at 31-30 by outscoring the Huskers 10-5 in the final four minutes of the second quarter. Ellis scored five straight including one of her three first-half threes to spark Purdue.

Nebraska took a 19-16 lead at the end of the first quarter after following behind 11-3 in the opening minutes. Krull and Hake led NU’s solid opening quarter by combining for 11 points in the period. Hake scored Nebraska’s first three points on a three-pointer after making her first career start in place of Krull. Hake added a pair of free throws, before Krull scored six straight points to close the quarter.

Krull added a basket late in the second quarter to join Markowski in sharing the first-half scoring lead for the Huskers with eight points.

The Boilermakers created separation in the third quarter, outscoring the Huskers 25-18, including 8-5 at the free throw line. Harper scored eight points in the opening five minutes of the quarter to help the Boilers take their biggest lead at 45-36, before NU cut the lead back to 50-46 on an Isabelle Bourne three with 2:00 left.

The Huskers return to Big Ten home action on Sunday when they take on No. 11 Maryland. Tip-off between the Big Red and the Terrapins is set for 1 p.m.