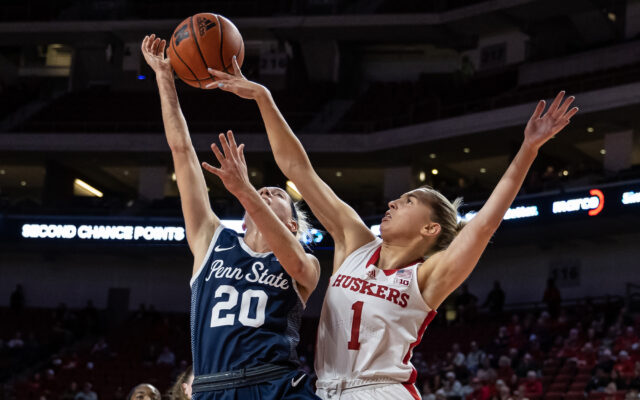 LINCOLN–(NU Athletics Jan. 11)–Freshman Callin Hake scored a career-high 16 points off the bench to lead five Huskers in double figures, as the Nebraska women’s basketball team rolled to an 80-51 victory over Penn State win over Penn State on Wednesday at Pinnacle Bank Arena.

Jaz Shelley (Moe, Australia) nearly added a triple-double with 10 points, 10 assists and nine rebounds, while Alexis Markowski contributed her seventh double-double of the season with 11 points and 15 boards as Nebraska dominated the Lady Lions from start to finish. Nebraska improved to 11-6 overall and 3-3 in the Big Ten, while dropping Penn State to 11-6 overall and 2-4 in the conference.

Just days after struggling through their worst shooting night of the season (2-25 3FG) at Rutgers on Saturday, the Huskers opened with four combined three-pointers from Shelley, Annika Stewart and Hake (2) to take a 12-8 lead with 4:30 left in the first quarter. Hake and the Huskers were far from done knocking down threes, as the Big Red finished the night 13-of-28 from beyond the arc, including a 50-foot heave from Kendall Moriarty in the closing seconds of the game as the shot clock expired to cap the victory.

Hake finished the night a career-best 4-for-6 from beyond the arc to spark the Huskers in just 18 minutes off the bench. Krull added three three-pointers on her way to a second straight double-figure scoring effort, while Shelley and Bourne each pitched in a pair of threes on Australia Night in Lincoln. Bourne, a 6-2 forward from Canberra, Australia, also got a layup with 7:15 left to become the 36th 1,000-point career scorer in Husker history.

In addition to the lights-out shooting for the Huskers from long range, who notched their ninth game this season with 10 or more three-pointers, the Big Red dominated the boards, 52-33, including 18 offensive rebounds. For the game, Nebraska hit 44.8 percent (30-67) of its shots from the field and 7-of-8 free throws. The Huskers also did an outstanding job on the defensive end, holding PSU to just 28.6 percent (18-63) from the floor, including just 5-of-21 from beyond the arc. Penn State did hit 10-of-16 free throws and won the turnover battle, 22-19.

Nebraska found its shooting stroke from long range and buried Penn State on the boards in the first half. The Huskers hit 8-of-20 threes in the first 20 minutes, and outworked Penn State 29-15 on the glass to build a 21-point first-half lead and claim a 41-28 halftime edge.

Hake, a 5-8 guard from Victoria, Minn., led the Huskers with 11 first-half points including a trio of three-pointers in just six minutes off the bench. Markowski, a 6-3 sophomore from Lincoln, added six points and 10 first-half rebounds to power the Big Red on the glass. Markowski pulled down five of NU’s 14 offensive boards in the opening 20 minutes. Shelley added six points, five rebounds and six assists in the opening half while sinking a pair of threes. Bourne and Stewart each contributed five points and a three-pointer.

Nebraska led 21-10 at the end of the first quarter thanks to four three-pointers to open the game and a three-point play from Sam Haiby to close the period. The Big Red also yanked down 10 offensive boards in the first 10 minutes. The Huskers then used a 15-3 surge that included a 10-0 run to build a 38-17 lead with 3:35 left in the half. Penn State responded with an 11-0 run that included a pair of Shay Ciezki threes to trim the margin to 38-28 before Krull closed the half with NU’s eighth three-pointer.

The Huskers rebuilt their lead to 20 points at the end of three quarters, before opening the fourth period with a 14-0 run that included five points from Krull, five more from Bourne and four from Shelley to give the Big Red its biggest lead of the night at 72-38.

For the game, Makenna Marisa led Penn State with 14 points on 5-of-19 shooting, while Shay Ciezki was the only other Lady Lion starter in double figures with 10 points. Taniyah Thompson added 10 points off the bench, including eight of PSU’s 13 points in the fourth quarter.

Nebraska returns to Big Ten home action on Saturday when the Huskers play host to unbeaten and No. 3 Ohio State. Tip-off between NU and OSU is set for 1:30 p.m. (CT) with tickets on sale at Huskers.com or from the Athletic Ticket Office at 1-800-8-BIG-RED. The game will be televised by the Big Ten Network.