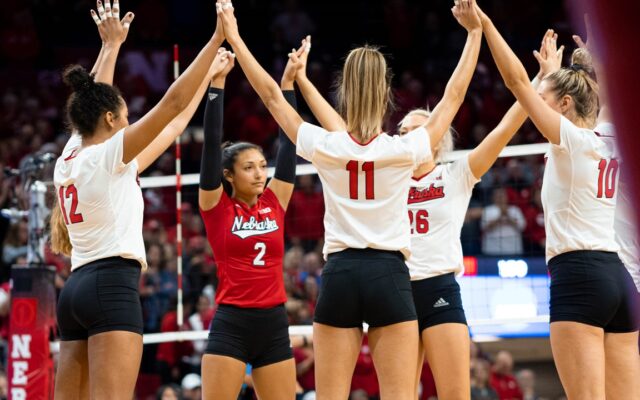 Madi Kubik had a match-high 11 kills, and Whitney Lauenstein put down eight kills on .368 hitting to go with a career-high seven blocks. Bekka Allick had seven kills and five blocks in her first collegiate match while hitting .667. Kaitlyn Hord chipped in five kills and seven blocks with an .833 hitting percentage. Lindsay Krause had four blocks.

Kennedi Orr set 26 assists and had seven digs. Nicklin Hames had eight digs in her first match as a defensive specialist. With her eight digs, Hames moved to No. 6 all-time at Nebraska with 1,370 career digs, passing Hannah Werth (1,367).

Libero Lexi Rodriguez had 12 digs and two ace serves, while Nicklin Hames had eight digs in her first match as a defensive specialist. With her eight digs, Hames moved to No. 6 all-time at Nebraska with 1,370 career digs, passing Hannah Werth (1,367). Kenzie Knuckles added seven digs and an ace.

Kyndal Payne had seven kills to lead the Islanders (0-1).

Set 1: The Huskers were in control early on with a 10-3 lead, as Kubik and Allick each posted two kills. Another two kills by Kubik had the Big Red up 15-8 at the media timeout. After the timeout, Allick was in on three straight blocks, two with Lauenstein and one with Kubik. Lauenstein then terminated a kill and the Huskers held a 20-8 lead after a 6-0 run. Orr connected with Krause for set point at 24-15, and a block by Hord and Lauenstein finished the set, 25-15. Nebraska hit .450 and held the Islanders to .032.

Set 2: Hord opened the set with a kill and four blocks – two with Lauenstein and two with Kubik – as the Huskers sprinted to a 6-1 lead. After an Islanders’ sideout, Lauenstein ripped three straight kills and combined with Allick for a block to make it 10-2. Krause and Hord had back-to-back kills, and then they teamed up for a block for a 15-5 Husker lead. Nebraska led 19-10 when A&M-Corpus Christi scored four in a row to get within five, 19-14. Kubik posted a kill to side out for the Huskers, and Allick killed an overpass before the Islanders hit wide to restore a 22-14 Husker advantage. Orr and Allick then stuffed an attack to make it 23-14, and the Huskers won 25-16 on a kill by Kubik. NU hit .294 and held Texas A&M-Corpus Christi to -.048 in set two.

Set 3: Nebraska came out of intermission on fire with kills by Lauenstein, Hord, two by Allick and four by Kubik to build a 12-2 lead. The Big Red never looked back, finishing off the sweep in style, 25-9, on Hayden Kubik’s first career kill.