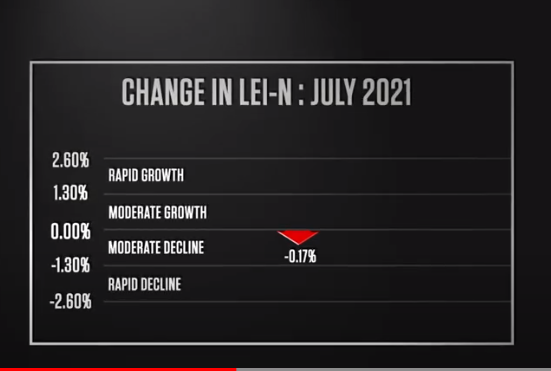 Furnished by University of Nebraska Bureau of Business Research

Lincoln, Nebraska (Aug. 25, 2021) — Nebraska’s leading economic indicator fell in July, according to the most recent report from the University of Nebraska–Lincoln.  The leading indicator dropped 0.17%, the first decline in 10 months.

“The small decline in the indicator suggests that economic growth may slow in Nebraska in the first months of 2022,” said economist Eric Thompson, director of the Bureau of Business Research and K.H. Nelson Professor of Economics at the university.

Building permits for single-family homes declined during the month, and there was a small decline in manufacturing hours worked.

There also was an increase in initial claims for unemployment insurance in Nebraska during July, and the value of the U.S. dollar rose. A rising dollar creates challenges for Nebraska businesses that compete in international markets, especially within the agriculture and manufacturing industries.

Business expectations were one positive component.

The full report and a technical report describing the indicators are available at the Bureau of Business Research website, https://www.bbr.unl.edu.