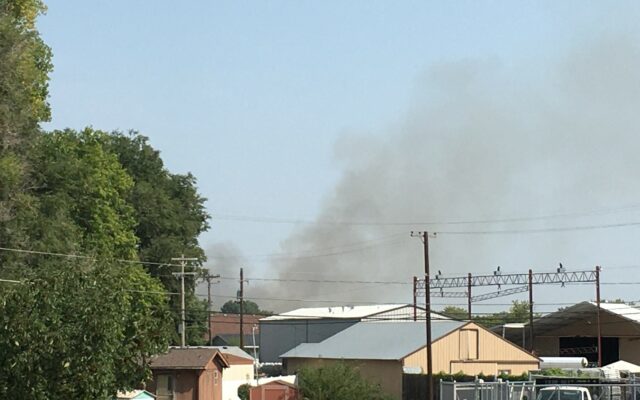 This picture taken by sports director Jeff Motz is looking northeast from the front side of the KFOR Studios at 3800 Cornhusker Highway of a large grass fire reported at the old city landfill north of 48th and Superior. (Jeff Motz/KFOR News)

LINCOLN–(KFOR Sept. 9)–A large grass fire from late Friday morning is under control, after it started in an open field west of the old city dump, which is north of 48th and Superior.

KFOR News talked to Lincoln Fire and Rescue Captain Nancy Crist, who said a passerby called in the fire and with the wind, the fire started spread quickly.

No one was hurt and roughly 2 to 3 acres of land was burned. Crist says some farm equipment being used hit a rock and sparked the fire.  The Air Guard tanker, along with grass rigs from Waverly and Raymond fire departments came out to help to get the fire under control.

Crist says none of the nearby businesses or homes had to be evacuated.