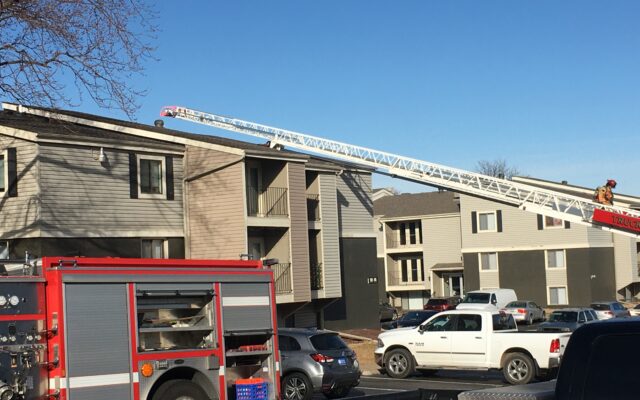 LFR crews had a ladder truck to use in fighting a three-alarm blaze Thursday morning at the Ruskin Place Apartments in the 900 block of Rutland Drive. (Jeff Motz/KFOR News)

LINCOLN–(KFOR Dec. 1)–A three-alarm fire broke out late Thursday morning at the Ruskin Place apartments near Warlick Boulevard and Old Cheney Road in southwest Lincoln, sending at least one person to the hospital.

Lincoln Fire and Rescue Captain Nancy Crist told KFOR News at the scene in the 900 block of Rutland Drive that fire crews were called around 9:30am about a fire on the third floor apartment building. She says the fire got into the attic space and crews made a quick attack.

It’s unclear on the status or extent of the injuries of the person taken to the hospital. Crist says they were able to get inside and prevent further spread of the fire. She says the left side of the apartment affected by fire forced firefighters to fight the flames from the backside of the apartment, in case there was a roof collapse.

What caused the fire and the exact damage amounts are under investigation. It took LFR crews just under an hour to get everything under control.