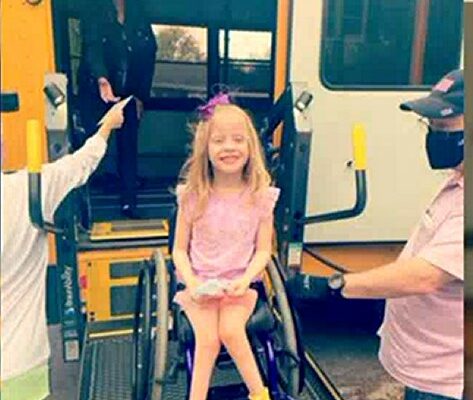 A photo courtesy of Melissa Eusterwiemann of her daughter, Lily, in her wheelchair boarding a school bus. The wheelchair was stolen from in front of their Lincoln home on Monday morning. (Photo provided by 10/11 Now)

LINCOLN–(KFOR Apr. 5)–An update to a story that we brought to you Tuesday morning from KFOR’s media partner, 10/11 Now.

LINCOLN–(10/11 Now Apr. 4)–A Lincoln mother and her daughter are hoping that someone returns the girl’s wheelchair, which was taken from their home on Monday morning before the school bus arrived.

Melissa Eusterwiemann told KFOR’s media partner, 10/11 Now, that between 8:10am and 8:40am Monday, the wheelchair for her daughter, Lily, had disappeared.  Each Monday morning, Eusterwiemann sets out Lily’s wheelchair to be picked up by the school bus and take her to Randolph Elementary School.  The wheelchair was gone as Lily was about to board the bus.

Eusterwiemann said Lily’s purple, kid-sized wheelchair was made to specifically accommodate lily back in 2017. She said it cost around $5,000.

“It’s just sad to me because this is something that she needs to help her get around in school and be active and be like her peers at school and now she’s not,” Eusterwiemann said.

For now, the mother and daughter are holding out hope that the wheelchair will turn up or someone will return it. If it isn’t returned in a few days, they will start the process of getting Lily a new wheelchair. Lily is still able to get around using her walker for now.

Eusterwiemann said if someone has the wheelchair, they can return it no questions asked.