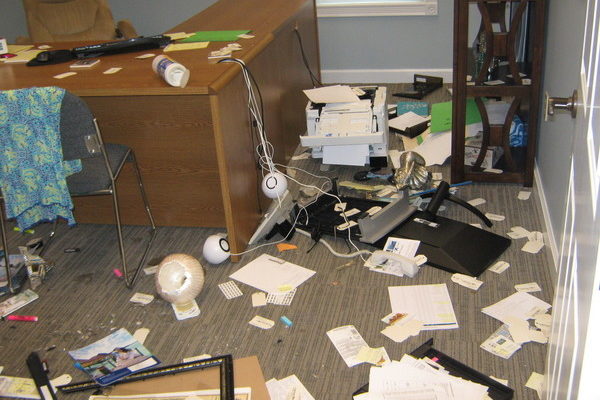 Damage done inside Cornerstone Travel near 34th and Old Cheney, after 26-year-old Jeremey Thomas allegedly broke in and vandalized the office. He was arrested on suspicion of felony criminal mischief. (Photo courtesy of Lincoln Police)

LINCOLN–(KFOR June 29)–A 26-year-old Lincoln man is accused of breaking into a south Lincoln business and vandalizing it early Saturday morning.

Police say Jeremey Thomas was arrested for felony criminal mischief. According to investigators, Thomas was seen laying in the bushes outside of Corner Stone Travel near 34th and Old Cheney. Several windows were broken, while desks and cabinets were tipped over, computers thrown on the floor, tables broken and everything was a complete mess.  Police Officer Erin Spilker says two bottles of alcohol were also stolen.

Evidence was found showing that Thomas was inside and he had an arm injury, consistent with damaging the windows.