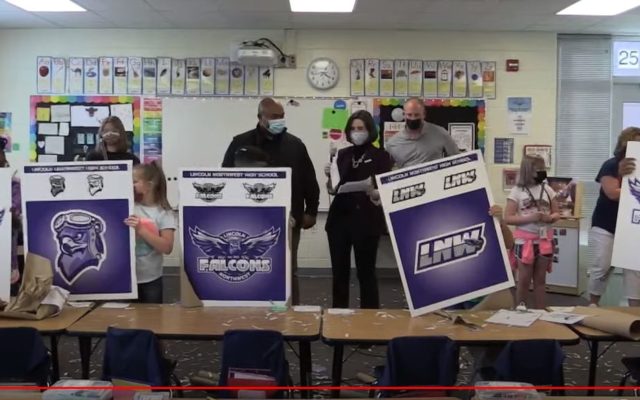 New principal Cedric Cooper (center) and students help reveal the new mascot and colors for Lincoln Northwest High School, which will open in the fall of 2022.

LINCOLN–(KFOR/News Release Sept. 30)–After much consideration and a last minute change, Lincoln Northwest High School will officially be nicknamed the Falcons with purple, white and gray as the school colors.

The unveiling Thursday afternoon at Arnold Elementary School revealed the Falcon logo will have goggles on it to honor the heritage of aviation in the Air Park area.   Northwest staff asked students and families from Arnold and Roper elementary schools, along with Park and Schoo middle schools, to vote between Aviators, Jets and Falcons for the mascot. Early on it looked like Aviators was going to be the number one choice, but in the last 24 hours of the voting window, the Falcons edged ahead.

Students also had the choice between light blue and purple, or just light blue or just purple. In the end, purple, white, and gray were chosen to be the official colors.

Northwest principal Cedric Cooper said student and family input was key to finding the mascot that represented their community.

“We held a lot of engagement opportunities at the schools, meeting with students and families to gather their input during the months of August and September,” Cooper said. “Nothing rallies a community like a school and we enjoyed meeting everyone and hearing their opinions.”

Once the mascot and colors were picked, the Northwest staff went to work with the Lincoln Public Schools Graphics team to develop the look for the mascot, the fonts, the colors and the logos. While the falcon was the focus, Northwest staff also wanted to tie in the aviator connection for the Air Park community.

“That is where the aviator goggles on the Falcon comes into play,” Cooper said. “The Fighting Falcon aircraft is part of the U.S. Air Force, and Air Park was once an Air Force base. We feel this really represents our community in northwest Lincoln.”

Northwest High School, located at Northwest 48th and West Holdrege streets will open in the fall of 2022. It will also house a Medical Science Focus Program for juniors and seniors in partnership with Bryan College of Health Sciences.

You can still watch the live unveiling of the school’s mascot and colors here.