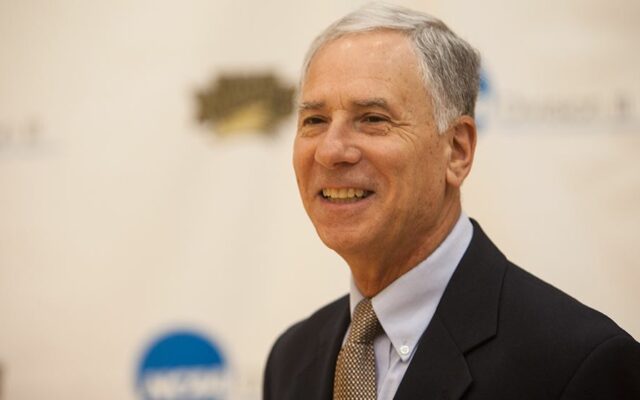 LINCOLN–(NWU Athletics Feb. 23)–After leading the Nebraska Wesleyan athletics department for 24 years, Dr. Ira Zeff announced his plans to retire in June as the Athletic Director.

“I can’t thank Nebraska Wesleyan University enough for everything it has given me during my time as Athletic Director,” stated Zeff. “I have the greatest job anyone could have and loved my time at NWU. But after 46 years in college athletics — 24 of those here at Nebraska Wesleyan — it’s finally time for me to step back and enjoy time with my family. As I look forward to spending more time with my wife, Liz, and watching our grandchildren grow up, I know the Prairie Wolves will be in good hands, and President Good will find an absolutely outstanding person to lead the way.”

In his role as athletic director, Zeff oversaw 21 varsity sports and a department of 68 coaches and staff. Throughout Zeff’s tenure, the Prairie Wolves found success both in their sport and in the classroom. The success in competition culminated in two national championships including the 2006 NCAA Division III men’s golf championship and the 2018 NCAA Division III men’s basketball national title. Nebraska Wesleyan had never won a national title in any sport prior to Zeff’s arrival. Under his leadership, the Prairie Wolves had numerous NCAA Top 10 finishes, won more than 50 conference championships, and claimed the Great Plains Athletic Conference (GPAC) All-Sports Trophy six times.

Under Zeff’s guidance,  NWU has become one of the most recognized institutions in the country for academic excellence among its student-athletes. Nebraska Wesleyan had at least one CoSIDA Academic All-American in every year of Zeff’s tenure, with a total of 124 total CoSIDA Academic All-Americans since 2000, ranking NWU ninth in the nation at all levels. Two-thirds of the university’s NCAA Postgraduate Scholarship honors came during Zeff’s tenure. Nebraska Wesleyan ranks sixth nationally among all institutions and third in NCAA Division III for the total number of NCAA Postgraduate Scholarships with 42.

Zeff enthusiastically led efforts to grow the athletic department with the addition of men’s and women’s swimming in 2014 and reintroduction of men’s wrestling in 2015. Perhaps among the biggest opportunities came in 2016 when Nebraska Wesleyan joined the American Rivers Conference (formerly the Iowa Intercollegiate Athletic Conference). At the time, Nebraska Wesleyan was the only NAIA-NCAA dual-affiliated institution in the country. With the move, NWU is the only NCAA DIII school in the state.

Zeff also aided the university’s building efforts with the addition of a new wrestling facility. Other facility enhancements under his leadership include new lights and turf, renovated press box, and two new videoboards at Abel Stadium; resurfacing projects for the Woody Greeno track and the floor of Knight Fieldhouse; and the addition of lights to Harold G. Chaffee Practice Field.

“Ira Zeff has made a profound impact on the history and trajectory of Nebraska Wesleyan University, and his leadership has led our Athletics Department to a state of excellence,” said President Darrin Good. “His will be very big shoes to fill, however, he has created an outstanding and successful athletics program that is sure to attract tremendous candidates for his replacement.”

NWU is conducting a national search for its next athletic director.