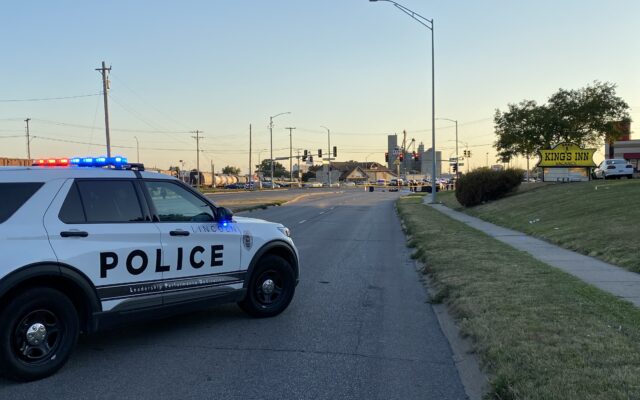 A Lincoln Police cruiser blocks off westbound traffic on Cornhusker Highway, after a deadly crash Monday evening, Aug. 29, 2022 at 35th and Cornhusker. This is looking west toward the scene. (Elijah Herbel/KFOR News)

LINCOLN–(KFOR Oct. 5)–Two arrests on Tuesday and Wednesday, as Lincoln Police did follow ups to a couple of unrelated fatal crashes in the past month or so.

Kelly’s vehicle was eastbound and hit a westbound motorcyclist, 29-year-old Pierce White of Lincoln, as she was turning. White was pronounced dead at the scene.

Another arrest was made on Tuesday, this one for the Sept. 5 fatality crash at Cotner Boulevard and Holdrege Street. The driver was identified by witnesses as 22-year-old Dylan Will of Lincoln.  Captain Kocian says Will, who was later identified as the driver, was not at the scene when police arrived.

“He (Will) returned to the scene about 30 minutes later and denied being the driver involved in the crash,” Kocian said.

Will was trying to pass another northbound vehicle on Cotner Boulevard right before the crash into a tree. Kocian said 25-year-old Yousef Al-Waeli was a passenger in the backseat and died from his injuries.

Will was arrested for manslaughter and leaving the scene.