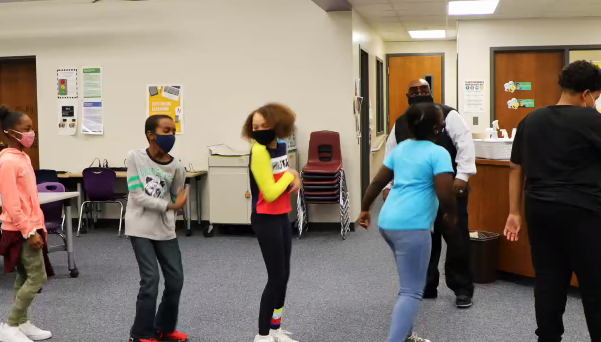 Lincoln, NE (April 28, 2021) A story of empowerment, education and inspiration, the documentary “We Will Not Be Silent” follows the four-month journey of eight scholars from Belmont Elementary School and the mentors who guide them as they prepare for their moving performance at the Martin Luther King Jr. Youth Rally and March in January 2021.

The hour-long documentary, produced by the Lincoln Public Schools Library Services Department, will be publicly released on Monday, May 3, with a special livestream and panel discussion at noon. The livestream event and full documentary will be available at LPS.org.

“We recognize that stories have a unique power to create change, and we are thrilled to cast focus on the amazing work done by LPS teachers and scholars to truly demonstrate the kind of work being done in LPS to empower diverse student voices and to help develop our students as advocates and leaders,” said LPS Director of Library Services Chris Haeffner.

The fifth-grade scholars are part of the Belmont TRACKS Scholar Empowerment Program, a leadership development program that utilizes a strength-based approach to foster their identity, self-advocacy skills and personal vision. One integral part of the program is its annual preparation for and performance at the youth rally and march, which was held January 18 this year.

A special premier event at the Lincoln Community Playhouse the prior weekend is planned for the featured scholars, their families and community stakeholders.

“This will be one of the first times people see what went on from October until Jan. 18,” said LPS Youth Development Coordinator Pete Ferguson, who started the program 13 years ago and continues to be its sponsor, along with Belmont fifth-grade teacher Bobbie Ehrlich. “That day is 13 minutes and 40-some seconds of what went on behind the scenes. And that’s what I want people to see.”

“I feel like Belmont has a very strong culture and tradition here,” said Ehrlich, who has taught at Belmont for 32 years, “and TRACKS is a big part of that.”