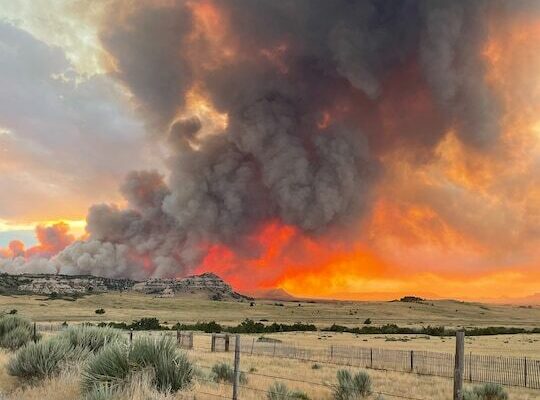 A view of the wildfire near Gering. (Courtesy of Kurt von Minden/Nebraska State Patrol)

GERING, Neb. (July 31, 2022 – NCN) – Authorities advised people stay away from Carter Canyon south of Gering Saturday due to a wildfire that had four separate start sites. The fire was still active Sunday morning.

The Nebraska State Patrol and Region 21 Emergency Management asked people to stay east of Highway 71 as firefighters battle the blazes caused, presumably, by lightning. One SEAT plane made three to four drops before being grounded for the night.

By Saturday night, over 1,000 acres had been estimated to have been burned at one of the start sites. The fire was zero percent contained. The majority of the Canyon Wildlife Management Area, and at least one home, have burned.

A smoke plume from the fire could be seen as far away as Sidney. The National Weather Service office in Cheyenne says northwest winds will initially bring smoke south-southeast Sunday, but winds will shift to more east, bringing smoke closer to Scottsbluff and the central/northern parts of the Panhandle Sunday night. The NWS says to be mindful of local poor air quality and stay indoors if sensitive to smoke.