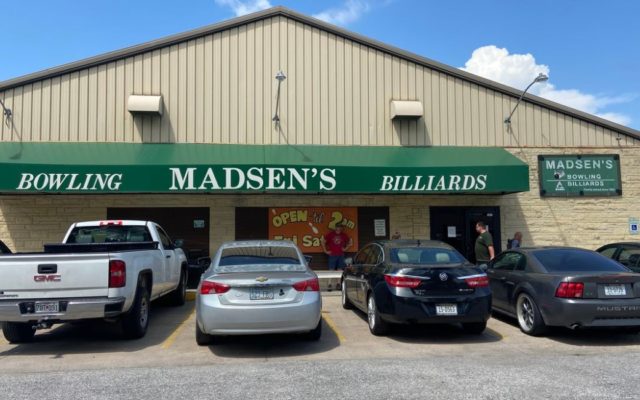 Lincoln, NE (August 1, 2020)  City officials said they will take no further action today, but will take civil legal action next week against Madsen’s Bowling & Billiards, 4700 Dudley Street, after the business failed to comply with an order by the Health Director of the Lincoln-Lancaster County Health Department (LLCHD) to close for 24 hours. Madsen’s was notified earlier today that it was not allowed to operate from 2 p.m. today until 2 p.m. tomorrow because of numerous violations of the current Directed Health Measure (DHM) to prevent the spread of COVID-19.

City officials pointed out that The Lincoln Municipal Code (LMC) authorizes the Health Director to order the closure of any business for the purpose of controlling communicable diseases. The DHM violations observed by LLCHD included signage on doors indicating that the wearing of masks was optional, employees not wearing face coverings, and no physical distancing of patrons.

The DHM states that failure to comply will result in legal action for enforcement by civil and/or criminal remedies.  According to the Lincoln Municipal Code, “any person who is found to have violated any provision of this Order within the City of Lincoln shall be guilty of a City Misdemeanor and subjected to a fine of no more than $500.00, or imprisonment in the county jail for a period not to exceed six (6) months, or both.  Each day that a violation of this Order continues is punishable as a separate and distinct offense.”  The DHM also states that the City Attorney “may institute injunctive or other appropriate civil proceedings necessary to obtain compliance or to abate any nuisance resulting from violations of this Order.”

Two Lincoln Police Officers accompanied a representative of LLCHD in delivering the notice to Madsen’s, and Health Director Pat Lopez said this is common practice for LLCHD.

City Attorney Yohance Christie said it is the responsibility of businesses to follow the DHM requirements, and no legal action would be taken against customers of the business.  But Lopez today reminded residents that the risk of COVID-19 spread locally remains high.

The Health Department (LLCHD) today notified Madsen’s that they were not allowed to operate for 24 hours because their violations of the Directed Health Measure (DHM) “presented a risk to public health and contribute to the community spread of COVID-19.”  The order includes EJ’s Lounge & Grill at the same location.

A mask mandate is included in the DHM that went into effect Monday, July 20 and is in effect through August 31. It requires business owners to ensure their patrons age five and older wear face coverings any time they cannot maintain six feet of separation with non-household members. Madsen’s is also licensed as a food establishment, and employees who have close contact with the public – including greeters, wait staff, cashiers, and others – are required to wear face coverings.  The DHM also requires businesses to limit parties of eight or less; to maintain at least six feet of distance between tables of patrons; and to limit capacity.

Health Director Pat Lopez said LLCHD has received numerous allegations of DHM violations at Madsen’s.  On July 29, LLCHD staff  met in person with Madsen’s management and provided the current DHM along with information on how the business could comply.  LLCHD continued to receive additional allegations of DHM violations between July 29 and 31.  On July 31, LLCHD staff inspections of bars and restaurants included Madsen’s, where significant violations were identified. The violations included signage on doors indicating that the wearing of masks was optional, employees not wearing face coverings, and no physical distancing of patrons.

LLCHD said those who observe someone not wearing a mask in public should stay six feet away from the individual and should not call law enforcement emergency or non-emergency numbers.  The public can make complaints regarding business compliance through the UPLNK app or the website, UPLNK.lincoln.ne.gov. Businesses with specific questions about the face covering requirement can call the Health Department at 402-441-6280.  More information on the mask mandate and the exceptions is available at COVID19.lincoln.ne.gov.

LLCHD said that  53 lab-confirmed cases of COVID-19 have been reported in Lancaster County today, bringing the community total to 3,074.  The number of deaths in the community remains at 15.