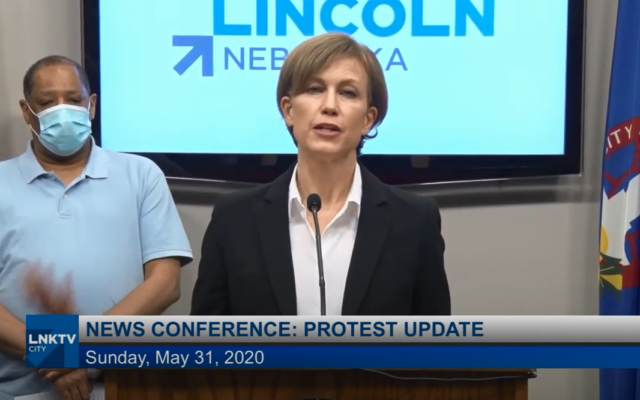 LINCOLN, Neb. (KFOR) – Mayor Leirion Gaylor Baird has issued an 8 pm curfew for all of Lincoln.  It goes into effect tonight, (Sunday) and will remain in effect until 6 A.M. Monday.  She also has requested help from the National Guard to enforce it and protect City infrastructure, and has received a vote of confidence from Governor Pete Ricketts.

The Mayor, Police Chief Jeff Bliemeister and several members of the City Council  held a press conference Sunday afternoon to update the community regarding the second night of protesting turned violent and destructive in Lincoln. She said that, during protests Friday and Saturday, she witnessed great pain during a genuine and peaceful assembly. She said protesters have largely been respectful.

She went on to say, however, that later in the night a small group of people “chose to resort to violence and destruction”, and added “that activity will not be condoned.” As a result, the Mayor declared a State of Emergency and issued an Emergency order for a curfew beginning at 8pm this evening (Sunday May 31st) and continuing until 6am on Monday June 1st. During those hours, only people traveling to work or seeking medical attention or help from Law Enforcement are permitted on public streets.

The Mayor also confirmed that the National Guard has also been deployed to provide additional resources to assist law enforcement to provide safety to the Lincoln community.  Guard members will help protect City infrastructure, she said, while Lincoln Police will continue to have primary Law Enforcement responsibility.

Mayor Gaylor Baird viewed the damage along Lincoln Mall Sunday and thanked those who were helping to clean up.  “I saw dozens of people pitching in to help clean up the damage from the night before – volunteers scrubbing graffiti and picking up shattered glass,” she said. “To all the people whose businesses and buildings were damaged as a result of last night’s events, know that we are dedicated to doing everything we can to prevent further needless destruction.”

Chief Bliemeister said police officers were struck multiple times with bottles, fireworks, and rocks, and one officer was injured.  He said there were three separate assaults reported by residents as a part of the protest.  One person sustained a laceration, possibly from a knife.

Most of the property damage was from a fire at the Universal Inland Insurance building, 601 S. 12th.   The Hall of Justice at 575 S. 10th has about $10,000 damage, and two bus shelters were destroyed.   Four people were arrested for  obstructing government operations and failure to disperse.  A fifth person was arrested for obstructing government operations.

“We can’t let these conversations and our work for justice end,” said Mayor Gaylor Baird.  “In the coming days, we will be creating opportunities to hold space for dialogue about racism, injustice, and inequality in our community. We also look to cultivate and support opportunities for listening and healing. Ultimately, the measure of our progress will be determined by not only what we do, but who we become as a result of this.”