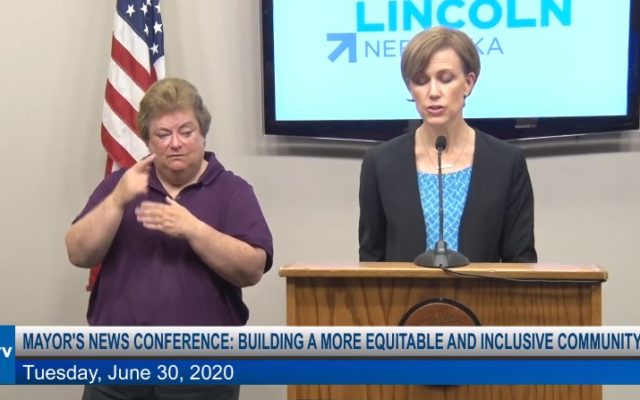 They include an explicit ban on choke and strangle holds by officers, the requirement for a verbal warning before lethal force is used in an arrest situation more detailed reporting after force is used, and development of more de-escalation strategies for situations in which force would traditionally be used by Police.

Members of the Public are able to comment on the recommendations until July 15 on a link which can be found at the City website.  The recommendations will be on the agenda of the CPAB on July 22nd.  The Mayor said the City Council will make the final determination, but added she hopes they will be finalized by the end of September.

Police Chief Jeff Bliemeister said that evaluations have been going on since the George Floyd and Black Lives Matter protests May 29-June 1.  The Chief said the results will be available when the review is finished.

The Mayor also announced that revisions will be made to the application form for a Mayoral Pardon.  The form can be found on the City website.  She also plans to expand the Citizen Police Advisory Board from 7 members to 9, allow citizens to submit complaints electronically and expand the time to submit claims to the Board from 45 to 60 days.

Funding for complete implementation of body-worn cameras will also be submitted as part of the City Budget.  The policy change will include guidelines for when recording must be done, how long the footage will be kept, and will require that Police Supervisors view the footage periodcally for training purposes.

LPD is conducting a mid-year expedited review of its policy on use of force to respond to recent concerns and to strengthen existing policies and expectations. The following proposed revisions to the policy would make current policy more explicit and codify LPD’s current best practices:

LPD is reviewing its protocols for mass demonstrations in order to update the training and protocols for facilitating peaceful protests. Police Chief Jeff Bliemeister said LPD has completed its initial debrief with the law enforcement officers involved in the events of May 29 through June 1, is creating timelines of events, and comparing investigative reports with a large amount of video. Bliemeister said the information will be presented to the Mayor and the City Council once the incident review is complete.

The Mayor announced that those who were arrested for curfew violations during the recent protests may apply for a pardon. This is consistent with law and public policy that permit anyone convicted of a violation of City Code to apply for a pardon. To make the process more transparent, accessible, and equitable, the pardon application has been revised and is available at lincoln.ne.gov (keyword: pardon). In six months, the Mayor will review pardon applications related to the curfew violations. Pardon determinations are not a foregone conclusion and will be made on an individualized, case-by-case basis, consistent with current policy. Pardons will not be granted to anyone who engaged in acts of violence, destruction, or physical aggression.

The Citizen Police Advisory Board is a seven-member body of residents appointed by the Mayor. It was established in 1976 to review complaints regarding police procedures and policies and make recommendations to the Mayor, City Council, and Police Chief. The following draft revisions to the ordinance governing the board will be presented to the City Council in July:

LPD will continue to participate in the Hold Cops Accountable initiative led by the Malone Center. This community-led initiative gives residents an opportunity to publicly share their comments on police-community relations.

Since 1993, LPD has used quality service audits developed in partnership with Gallup to poll individuals who were victims of non-violent crimes, involved in a traffic collision, or issued a citation. The 2019 results can be found atpolice.lincoln.ne.gov (search for QSA). LPD also participates in the city’s regular resident satisfaction surveys conducted by the UNL Public Policy Center, and future surveys will continue to evaluate the public’s trust and confidence in the police.

The Mayor’s proposed budget for 2020-2021 includes funding for the complete implementation of body-worn cameras for every officer. LPD policies address the circumstances in which body-worn cameras must be used and how long the video must be retained. Those are available at police.lincoln.ne.gov at the Department Policies link. The policies also require that supervisors proactively review their officers’ body-worn camera video for training and quality assurance.

On the city’s open data portal at opendata.lincoln.ne.gov, LPD provides policing data broken down by race, ethnicity, and other categories. They also share data on their own website and through the Nebraska Crime Commission. LPD plans to publish more visually accessible versions of their data on topics such as citations and arrests, traffic stops, missing persons investigations, crime trends, and trends in mental health calls.

As part of its community policing model, LPD develops relationships with nonprofit social service providers to help officers respond to residents with a wide variety of needs, including  substance abuse and mental health issues. LPD has increased its investment for its partnerships with the Bridge Behavioral Health and the Mental Health Association of Nebraska in its proposed budget for 2020-2021.

Recognizing that disparities in policing are a symptom, not the root cause, of racial injustice, the Mayor said the city is committed to long-term efforts to create a more just and equitable community, including the following: