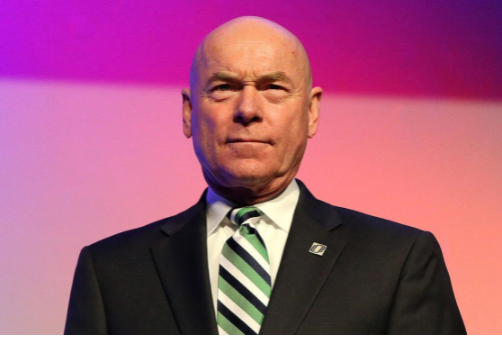 Kemp will assume the role on Monday, July 19, as Trev Alberts departs UNO to become the next Director of Athletics for the University of Nebraska-Lincoln.

“I am thankful that Mike Kemp has graciously agreed to serve as interim Athletic Director,” Chancellor Joanne Li, Ph.D., CFA said. “I have the utmost confidence in his abilities, experience, knowledge, and character to effectively lead this department.”

“Mike Kemp is a seasoned coach and administrator who has dedicated the past 25 years of his life to UNO and our student athletes,” Carter said. “I know Mike will lead Omaha Athletics with integrity and resolve during this time of transition.”

Kemp thanked Alberts for his years of service to Omaha Athletics, reflected on the road that led him to this opportunity, and expressed his excitement for the future.

“This is a bittersweet time for me,” Kemp said. “Trev Alberts has been a trusted friend and a great colleague for over twelve years. Together we have gone through many challenging and thrilling experiences. He has left an indelible mark on Omaha Athletics that will ink his legacy in our athletic lore. It is a great honor for me to be entrusted with the responsibility to lead this department. I want to thank President Carter, Chancellor Li and the Nebraska Board of Regents for this tremendous opportunity. I have spent my career here at UNO dedicated to creating opportunities for student-athletes, first as a coach, then as a sport administrator, and I feel blessed that my journey has led me here. In this new position, student-athletes will be the center of my efforts. With the help of the campus community, and the continued support of Omaha at large, we will be able to continue the tremendous growth that Omaha Athletics has experienced over the past 12 years. I look forward to the challenge.”

“Mike Kemp has been a trusted colleague from the day I set foot on UNO’s campus. He is a valued leader both in athletic competition and in administration, and is a beloved member of the Omaha community,” Trev Alberts said. “Omaha Athletics is in good hands.”

For his service to the Conference and NCAA men’s hockey during a difficult 2020-21 season, Kemp was honored in April with the 2021 NCHC Commissioner’s Award. He is the first person to receive the NCHC Commissioner’s Award, which is presented to an individual who, through dedicated effort and service, has achieved a singularly distinguished accomplishment that has significantly enhanced the NCHC or a member institution during the current academic year.

During Kemp’s tenure at the helm of the Maverick hockey program, the team became a national leader in college hockey attendance, a tradition that continues today. Kemp coached five All-Americans while at Omaha and had a total of twelve all-CCHA players in the 10 years he coached in the league. Also during his coaching career, he served on the board of governors of the American Hockey Coaches Association, serving as a second vice-president from 2000 to 2003. He was a member of the board of directors of the Special Olympics of Nebraska from 2002 to 2014 and was a board member of the Nebraska Sports Council from 2015 to 2018.

Kemp is currently a board member of the Omaha Sports Hall of Fame and serves as the chair of the six-member NCAA Division I Men’s Ice Hockey Committee.