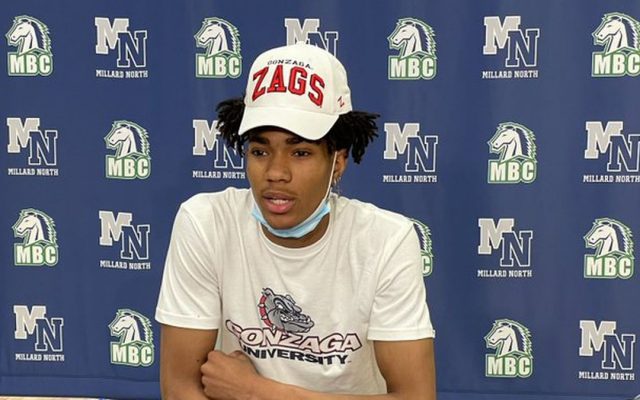 OMAHA–(KFOR Mar. 26)–Nebraska’s first ever five-star prospect in boys basketball under the recruiting system rankings announced his decision on where he will play college basketball next season.

Hunter Sallis, the 6-5 shooting guard/small forward that helped Millard North win their first Class A boys state basketball championship earlier in March, announced on his 18th birthday on Friday he will enroll and play at Gonzaga University.  Sallis explained why he chose Gonzaga.

“They just been having a great season,” he said.  “They have been looking really good and I also took an official visit there, so it just made sense.”

Sallis told reporters after the announcement he didn’t make a final decision until this past Monday (March 22) and informed Gonzaga coaches on Wednesday (March 24).  He was courted by several college basketball blue bloods, including North Carolina, Kansas, UCLA, and Kentucky. Sallis said he also strongly considered staying in Omaha and attending Creighton, who will play Gonzaga in the NCAA Tournament’s round of 16 this Sunday.

Rivals.com lists Sallis as the nation’s seventh best player in the 2021 recruiting class.