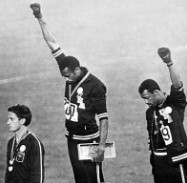 During the award presentation for the Men’s 200 metres event final at the 1968 Summer Olympics, American athletes, gold medalist Tommie Smith (center) and bronze medalist John Carlos (right) each raise a clenched fist and bow their heads during the US National Anthem as a Human Rights protest, while they stand on the podium with Australian silver medalist Peter Norman (1942 - 2006), Mexico City, Mexico, October 16, 1968. All three men wore badges expressing support for the Olympic Project for Human Rights; and Smith and Carlos' gestures have been described (by the men themselves) as both Black Power and Human Rights salutes. Visible at bottom center is the David Cecil, the 6th Marquess of Exeter (1905 - 1981) who presented the medals (Photo by Popperfoto via Getty Images)

(KFOR NEWS  January 13, 2023)   Lincoln, NE    Tommie Smith, the world-record sprinter who, along with fellow runner, John Carlos, raised their fists to protest racism and injustice against Black people in the United States during the 1968 Summer Olympic in Mexico City is a keynote speaker during the University of Nebraska–Lincoln’s MLK Week celebration.

Smith won the 200-meter sprint final with a world record time of 19.83 seconds.  As the national anthem played, he and bronze medalist, John Carlos , raised their fists to protest racism and injustice.  The symbolic moment propelled Smith into the spotlight as a human rights advocate.  Smith and Carlos accepted the Arthur Ashe Award for Courage for the salute at the 2008 ESPY Awards. In 2018, Smith received the Dresden Peace Prize.

Smith will speak during the MLK Commemorative Celebration from 6 to 8 p.m. Jan. 25 in the Nebraska Union’s Centennial Room.  Registration is required by Jan. 20 at https://mlkweek.unl.edu.  The event is $25 per individual or $150 for a table of six. Husker students will be admitted free, though registration is required.  The 2023 Chancellor’s Fulfilling the Dream Awards will be presented during the commemoration.

The annual MLK Banquet, featuring a keynote address by Cheryl Brown Henderson, is at 6 p.m. Jan. 28 in the Nebraska East Union’s Great Plains Room.  Brown Henderson is a daughter of the late Rev. Oliver L. Brown, the namesake of the landmark U.S. Supreme Court case Brown v. Board of Education of Topeka that established racial segregation in public schools as unconstitutional.  The banquet is hosted by the Afrikan People’s Union and the University Program Council.

“This year we reflected on the impact of historical moments and its connection to our current socio-political climate and national conversations,” said Nkenge Friday, senior assistant vice chancellor for strategic initiatives at Nebraska and chair of the MLK Week Committee. “We wanted to offer a speaker who has reflected the ideals of human rights, activism and its connection to a platform that allows for visibility and collective impact.  In addition, we have partnered with members of the campus and community to deliver opportunities that expand conversation, and community engagement and service, all in support of justice and equity.”

The university will honor the legacy of the Rev. Dr. Martin Luther King Jr. with a series of events Jan. 23-28.  The week, which carries the theme “The fierce urgency of now,” will highlight the importance of social and racial advocacy, education and engagement.  The celebration will offer events for students, faculty, staff and the Lincoln community.

For more information on volunteer opportunities and to sign up, visit https://mlkweek.unl.edu/volunteer.