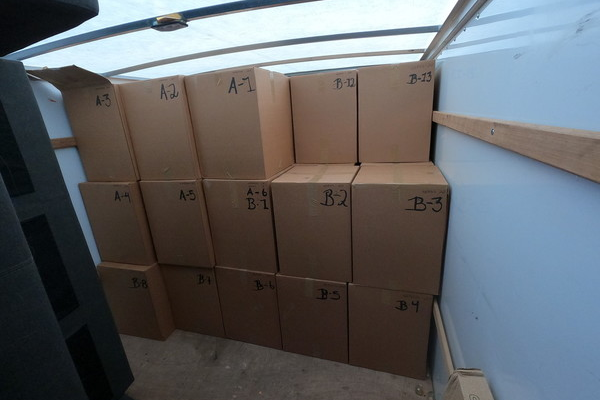 Boxes containing packages of marijuana found inside the cargo area of a moving truck that was pulled over Tuesday morning, July 26, 2022 along eastbound I-80 near Emerald. (Photo Courtesy of the Lancaster County Sheriff's Office)

EMERALD–(KFOR July 27)–The Criminal Interdiction Unit of the Lancaster County Sheriff’s Office on Tuesday morning made a traffic stop along I-80 west of Lincoln, which later led them to the discovery of more than 1,100 pounds of marijuana.

Sheriff Terry Wagner says deputies pulled over a moving truck that was eastbound at Mile Marker 392 near Emerald for following another vehicle too close and driving over the white line on the right side of the road.  One deputy could smell marijuana coming from inside the truck and developed probable cause to search it.  Wagner says 1,144 pounds of high-grade marijuana found in one-pound, vacuum-sealed bags had been stored in the cargo area of the truck.

The driver, 43-year-old Daniel Cardinel of Forsythe, Missouri, was arrested for possession of marijuana with intent to deliver, plus not having a drug tax stamp. Wagner says the marijuana was heading from California to Illinois.