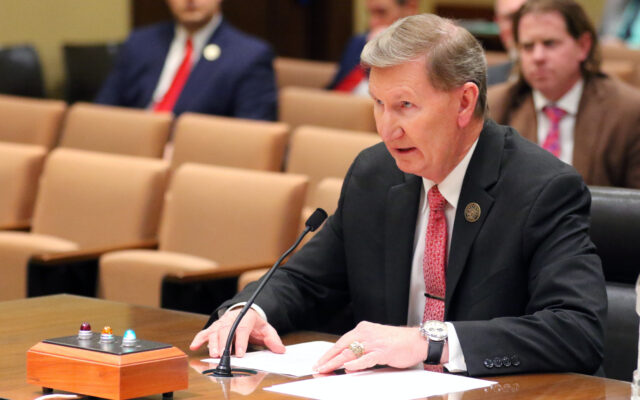 The university secured a 2.9 percent interest rate on its bonds, fixed for 40 years.

Put into context, according to Carter: If the university were going to market today, it likely would pay an interest rate of about 4.5 percent – resulting in $6 million more per year in interest costs.

“Now multiply that over 40 years, and we’re talking about serious money,” Carter said. “In short, thanks to the vision and support of our elected officials, the leadership of our Board of Regents, and good planning by our teams, we are going to save hundreds of millions of dollars for students and Nebraska taxpayers.”

Furthermore, Carter said, the university’s deferred maintenance effort is creating significant economic impact for the state: Of the projects where construction is underway, the overwhelming majority – 94 percent – of the work has gone to Nebraska companies. More than 40 Nebraska companies have been engaged thus far, supporting good jobs for Nebraskans.

“Equally important, our quick action is allowing us to deliver a major win for current and future students, faculty and staff: quality, updated facilities where they can teach, work and learn,” Carter said.

“This is a win all the way around for the University of Nebraska community and all Nebraska taxpayers.”

At the time of last year’s bond sale, the University of Nebraska System faced $800 million in deferred maintenance needs, a common challenge for colleges and universities nationwide as they deal with rapidly aging infrastructure. More than one-third of the NU System’s buildings are 50 years or older, requiring significant upgrades to make them suitable for modern-day education.

Since the bond sale, the university has moved forward with numerous maintenance projects across the campuses, most of them directly tied to the university’s teaching, research and service missions.

For example, last week the Board approved a renovation of the University of Nebraska-Lincoln’s historic Neihardt Hall, which previously served as student housing and will be turned into space for student support services. The Board also approved a project that will renovate currently unusable space at the University of Nebraska at Omaha’s Roskens Hall into STEM (science, technology, engineering and math) classroom and research space.

Previously, the Board approved a renovation of the University of Nebraska at Kearney’s campus library and replacement of UNL’s Westbrook Music Building. Built in the 1960s, Westbrook will be replaced with a new facility that offers a 300-seat recital hall; rehearsal halls for the Cornhusker Marching Band, the opera program and other music groups; a digital recording facility; and teaching and office space.

That unique element of the partnership has attracted national attention as other institutions look for solutions to their own deferred maintenance challenges. Inside Higher Ed, a leading national higher education publication, recently featured the University of Nebraska’s approach, and NU has fielded inquiries from colleagues across the country interesting in learning more.

“Our deferred maintenance effort is a prime example of the long-term, disciplined approach that the University of Nebraska takes to fiscal planning,” said Board of Regents Chairman Bob Phares of North Platte. “We struck at exactly the right time, and it’s already paying dividends for Nebraskans and creating economic growth for our state.

“We’re able to provide great facilities for students, faculty and staff, while saving taxpayers hundreds of millions of dollars in the process. I could not be more proud of the thoughtful planning and collaboration with elected leaders that has gotten us to this point.”

The University of Nebraska System’s success in fiscal management was recently affirmed with high marks from S&P Global and Moody’s, two of the nation’s leading credit ratings agencies.