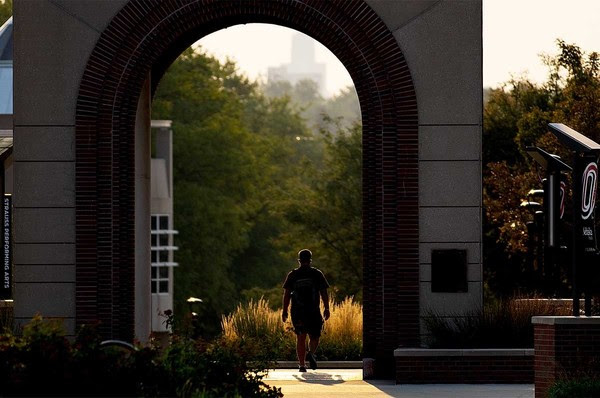 A student walks under the arches of the Henningson Memorial Campanile on UNO's Dodge Campus on the first day of the Fall 2020 semester.

Lincoln, NE (September 9, 2020) University of Nebraska President Ted Carter announced today that enrollment across the NU system is up 1 percent this year.  Growth occured among Nebraskans and underrepresented students following a series of steps by the university to prioritize access, affordability and predictability amid the uncertainties of COVID-19.

Fall 2020 enrollment at NU’s four campuses plus the Nebraska College of Technical Agriculture is 51,703, an increase of almost 500 students over last year. System-wide enrollments of first-time freshmen, undergraduate, graduate and professional students all grew, and resident enrollment increased nearly 2 percent, with all campuses seeing growth among Nebraska undergraduates.

Additionally, campuses are seeing growth among minority, first-generation and other historically underrepresented students, figures which indicate progress toward the university’s goals for diversity and inclusion.

This year’s increase ends two straight years of declines, and gives the NU system its sixth-highest enrollment in history – an accomplishment made even more remarkable, Carter said, by the challenges of a global pandemic that was widely predicted to impact enrollment, particularly among international students, at institutions across the country.

“At an unprecedented time, the University of Nebraska has delivered for the people of the state,” Carter said. “We knew early on that this would be a recruitment and admissions cycle unlike any other. Our goal was to provide as much hope and predictability as possible, so that students and families can continue to realize the incredible value of a University of Nebraska education.

“Our commitment has paid off. I could not be more grateful to the faculty, staff, chancellors and their leadership teams across the campuses for all they have done to put students first during this uniquely challenging period. When our university grows, so grows our state.”

Specific successes for fall 2020 include:

The report compiled by UNO’s Office for Institutional Effectiveness shows that UNO’s 15,892 total students is the highest since 1992, bolstered by an incoming freshman class of 2,220 – the largest in the last decade – and 1,381 new transfer students. In addition, UNO’s retention rate of 76.9% from the Fall 2019 semester to Fall 2020 is the highest in university history.
Additional highlights include:

“Our enrollment numbers reflect the hard work and perseverance that our deans and student recruitment offices have shown over the past year. I could not be more proud and grateful,” Chancellor Jeffrey P. Gold, MD, said. “This increase also is indicative of our growing reputation as a leading academic health science center. In short, students want to learn – both in-person and remotely – from the quality faculty members here at UNMC.”

There was a 16% decrease in international students in UNMC due to COVID-19-related travel restrictions.

Below are enrollment highlights. (Note: Some students are enrolled in dual programs.)

College of Dentistry
The College of Dentistry admitted 53 new dental students and 24 new dental hygiene students. The total student enrollment is 299, including 41 post-graduate students. Of the incoming students, 40 are from rural areas and 37 are from cities. For dental hygiene, it’s 12 rural and 12 urban students. There were 527 applications for the 53 slots in this year’s dental class.

College of Medicine
There are 131 new students entering their first year of medical school, bringing the total enrollment to 514, which includes 32 students in the M.D./Ph.D. Scholars Program. The new students in the college, about 89% of whom are Nebraska residents, were selected from a total of 1,655 applicants. There are 616 resident physicians training at UNMC.

College of Nursing
The College of Nursing enrolled 1,129 students across UNMC’s five campuses in Omaha, Lincoln, Kearney, Scottsbluff and Norfolk. This represents a 3.9% growth over the past year.

College of Pharmacy
The college admitted 59 new students with an average GPA of 3.59. Of these new students, 83% are Nebraska residents with 59% coming from rural areas. The new students bring the total enrollment in the four-year program to 237 students.

College of Allied Health Professions
A total of 686 students are enrolled in the college, including online students. Campus-based enrollment increased by 8% over 2019-20, and about 20% over the past three years. The college has students in 14 different programs.

Graduate Studies
Graduate Studies enrollment is 494 students which represents a 1% decrease over last fall. Graduate Studies offers advanced instruction leading to Master of Science and Doctor of Philosophy degrees in fields ranging from the basic biomedical sciences to public health to patient-oriented research. Among all UNMC graduate students, 74 percent are enrolled in Ph.D. programs.

Munroe-Meyer Institute
Munroe-Meyer Institute (MMI) is providing interdisciplinary training, course work and practicum experiences in research and patient care to 340 students enrolled in undergraduate, master’s and doctoral programs from universities in Nebraska and across the country, including UNMC. There are 240 new trainees this year. This includes 24 master’s level students, 24 doctoral level students, 24 interns and 18 post-doctoral fellows. (Since most students participating in these programs are enrolled at other University of Nebraska institutions and are not UNMC students, they are not counted in UNMC enrollment numbers.)