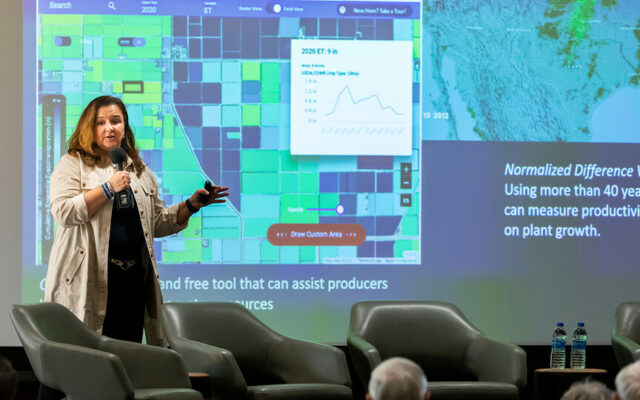 While most people might more immediately imagine shuttle launches and the Mars rover, the planet NASA studies more than any other is Earth, St. Germain said.

Currently, 25 NASA satellites ranging in size from a shoebox to a carry-on suitcase orbit the earth, measuring all kinds of things: including precipitation in atmosphere, soil moisture and pollutants in the atmosphere, she said. Two satellites fly together and measure tiny changes in Earth’s gravitational pull caused by water levels rising and falling. NASA scientists have used this data to create a two-week soil moisture outlook, among other tools.

Now, NASA is working to make this information more useful to farmers, which is what brought St. Germain, who began her career as an assistant professor of electrical engineering at the University of Nebraska–Lincoln, and several other NASA scientists to Nebraska Aug. 22-23. During their visit, they spoke with farmers in Mead, Giltner and Lexington about their data needs and toured the Eastern Nebraska Research, Extension and Education Center to learn how the university is using data from NASA and other sources. In addition, St. Germain gave a talk and participated in a panel discussion titled “Space for Ag: NASA Satellites and Science to Support Food and Water Security,” as part of the Institute of Agriculture and Natural Resources’ Heuermann Lecture series.

Brandon Hunnicutt, a Nebraska farmer and vice chairman of the Nebraska Corn Board who participated in the panel, said he is always asking himself the same question: “What is the next big thing to bring new value back to the farm?”

Better satellite data might be that thing. Hunnicutt already has access to satellite data, and he also uses other precision technologies, such as soil moisture probes. Those tools have helped him farm more efficiently but sometimes they provide as many questions as answers. Soil moisture probes, for example, provide information only on the specific locations where they are placed. Hunnicutt often wonders if the information he is getting from them is truly representative of the field.

And while he has access to satellite data, it isn’t always easy to use or analyze, and it doesn’t always interface easily with other farm technologies.

Kerry and Angela Knuth, who were among the farmers that the NASA delegation visited during their trip to Nebraska, echoed this concern.

They farm about 2,300 acres of corn, soybeans and wheat with their sons near Mead and, like Hunnicutt, already use satellite data and many other technologies on their farm, both through Nebraska Extension’s On-Farm Research Network and on their own. But the Knuths have limited time, and analyzing data from various sources can be cumbersome and time-consuming.

Even so, Angela Knuth said she can see the potential of satellite imagery to better understand the nutrient needs of crops throughout the growing season, or to measure the biomass in the soil, or to more specifically quantify the benefits of cover crops.

That is exactly the kind of feedback NASA was hoping for, said Forrest Melton, one of the NASA scientists on the trip.

“A big part of this trip for us is listening and learning, and one of the things that we heard loud and clear … is that farmers are looking for tools that help them make a decision, not that tell them what to do,” he said.

Jackson Stansell, a Husker graduate student and founder of ag-tech startup Sentinel Fertigation, said during the panel discussion that is something he hears frequently from farmers, too.

Farmers are already using some NASA data, though perhaps indirectly. Tools such as the U.S. Drought Monitor — produced by the university’s National Drought Mitigation Center, the National Oceanic and Atmospheric Administration and the U.S. Department of Agricultur — draws from NASA data and more than 50 other data sources to create maps and other tools that illustrate which parts of the United States and the world are currently experiencing drought, said Mark Svoboda, NDMC director and another panelist.

More directly, the farmers who attended the lecture and welcomed the visiting scientists onto their farms had a chance to help define how NASA can fine-tune its existing tools for agriculture and help inform new ones.

“It takes a while to build and launch a new capability, so one of the things we want to do is to build a better product for the future,” she said