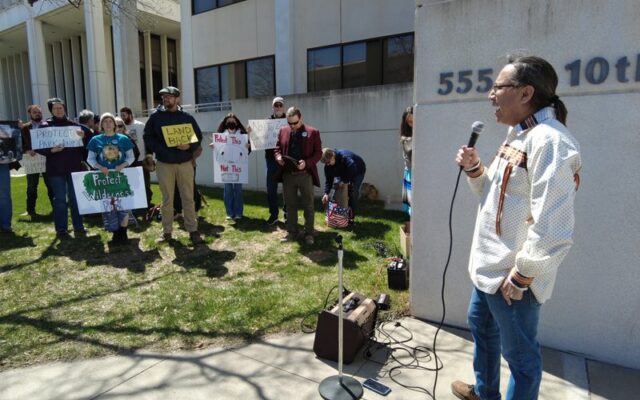 (KFOR NEWS  August 3, 2022)   LINCOLN, Neb. – Native community members in Lincoln are turning to a zoning appeal process in a new effort to resist a controversial housing development next to a large natural park and sacred ceremonial grounds.

On Tuesday, Indian Center, Inc. and representatives of the Niskíthe Prayer Camp filed an appeal with the City Board of Zoning Appeals, supported by Big Fire Law & Policy Group LLC and the American Civil Liberties Union (ACLU) of Nebraska.

The appeal asks the board to reverse earlier approval of the project. It argues that when city planning officials recommended approval of the project earlier this year, they disregarded guidance in the Lincoln-Lancaster County 2050 Comprehensive Plan, ignored environmental concerns of building next to Wilderness Park, and dismissed feedback on the site’s cultural and religious significance. Native community members have repeatedly said that the development will displace ceremonies at a nearby historic sweat lodge.

The appeal comes after months of outspoken opposition to the development from Native community leaders and environmental advocates. The filing requests a stay in all development proceedings while the appeal is ongoing.

The appeal will receive a public hearing followed by an appeals board decision. If the board rejects the appeal, the appealing groups could then take the issue to Lancaster County District Court.

“Today we are taking steps to protect our sacred ceremonial grounds and Wilderness Park from the reckless actions of Lincoln developers, city planning staff and elected leaders,” Abourezk said. “The planned Wilderness Crossing project would severely impact the peace and sanctity of these vital community resources and impede the ability of Lincoln residents to use these spaces for recreation, rehabilitation and prayer. This project would lead to untold environmental damage to surrounding lands and the forced relocation of our city’s oldest inipi, or Native American sweat lodge.”

“Though we took our tipis down from Snell Hill in May, our work to protect that land, Salt Creek, and our ceremonies has not stopped. We are humbled and energized by the partnership we’ve forged with Big Fire and the ACLU of Nebraska to continue to fight this development and demand respect for the land and Indigenous life ways. We understand the harm that this development will cause to the environment and the community, and we are far from done advocating for its cessation. We call upon the city officials to honor their commitment to responsible, ethical, conscientious city growth, as outlined in the comprehensive plan. We ask that they not sacrifice community safety, mental and spiritual well-being, and civic integrity to support this development that will do nothing to offer affordable housing in this city.”

“We stand in prayer for our Native way of life that has been under threat from the Wilderness Crossing Project. This planned development is a continuation of spiritual and cultural erasure, as well as degradation of the environment. We believe in walking with responsibility for the next seven generations. Therefore, our purpose is to enlighten the developers, the city leaders, and all involved that what is taking place, if they continue this onslaught, will inflict unimaginable harm upon our sacred ceremonial grounds and upon the sacred earth that surrounds this area, for generations to come. It is not too late to set things right on these matters pertaining to our future and Mother Earth. Cease this development!”

“In approving the Wilderness Crossing development project, the City of Lincoln has shown a callous indifference to the objections of the city’s Native American community.  We must take a stand against city officials’ blatant disregard and disrespect of the Native community and of Native religions practices. This administrative appeal outlines how Mayor Gaylor Baird’s recent development approvals have violated her responsibility to fully conduct all administrative work and affairs of the city in a lawful and appropriate manner.  As such, it is only the first step in our work to ensure that Lincoln’s Native American community is finally and truly heard.”

“This entire process has been rooted in cultural, racial and religious erasure. City officials shrugged their shoulders as they approved a development that threatens Native community members’ ability and right to practice religious ceremonies as they have for decades at this location and for countless generations on this land. We are calling on the city to directly address the harm and find a solution.”

At least two appeals of the Wilderness Crossing project are now in motion. The owner of the land that houses the sweat lodge site joined today’s filing and has also filed a separate appeal to the District Court of Lancaster County that raises concerns related to annexation and land use.

“Kathleen Danker is proud to stand with and support the Native people involved in this matter, and supports the protection of sites which have been used for sacred rituals for decades,” said Ken Winston, attorney for Ms. Danker.