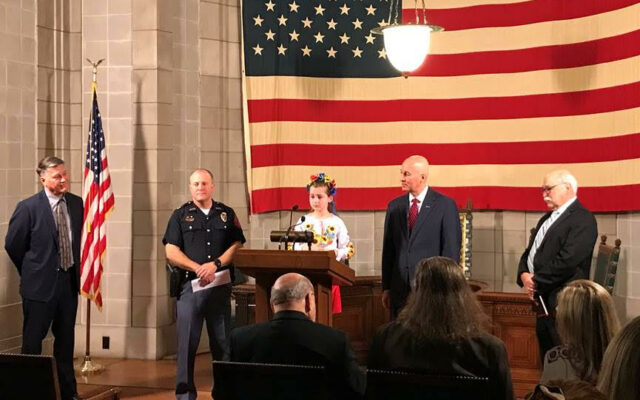 “Ukrainians have bravely withstood Russia’s unprovoked invasion for more than a month,” said Gov. Ricketts.  “As they’ve come under attack, the Ukrainian people have shown spirited resistance that has won the respect of the free world.  As they defend their homeland, Ukrainians have an immense need for protective gear.  Agencies large and small from across Nebraska have stepped up to help meet this need.  I’m grateful for Nebraskans’ generosity in donating these critical supplies.”

A truck from the Nebraska Department of Transportation delivered the supplies to Iowa yesterday.  Earlier today, Iowa Governor Kim Reynolds held a press event as supplies from Nebraska and Iowa were loaded onto a plane bound for Ukraine.

“Ukrainian men and women have taken up arms alongside their military to protect their homeland from Putin’s unprovoked attack,” said Gov. Reynolds.  “Iowa has a special connection to Ukraine through our sister state relationship with Cherkasy.  Today’s donation fulfills an urgent need in Cherkasy and represents an incredible team effort from the entire state.  I’m proud that Iowa is doing what we can to help.”

At this afternoon’s press conference at the Capitol, members of Nebraska’s Ukrainian community expressed gratitude for the State’s support.  They also underscored the need for humanitarian aid to assist Ukrainians affected by Russia’s invasion.  Third grade student Lexi Fedoronko shared her concerns for her grandparents who are in Ukraine, and she asked Nebraskans to do what they can to help.  Assumption Ukrainian Catholic Church in Omaha is collecting donations through its website: ukrainiancatholicbvm.org.

Gov. Ricketts mentioned numerous other organizations working to provide assistance within Ukraine and to Ukrainian refugees.  They include:

Gov. Ricketts thanked the Nebraska Department of Transportation, Military Department, State Patrol, Department of Administrative Services, and local law enforcement agencies and associations for working together to gather the donations and send them to Iowa.  He also thanked Governor Reynolds and Iowa state agencies for their partnership.