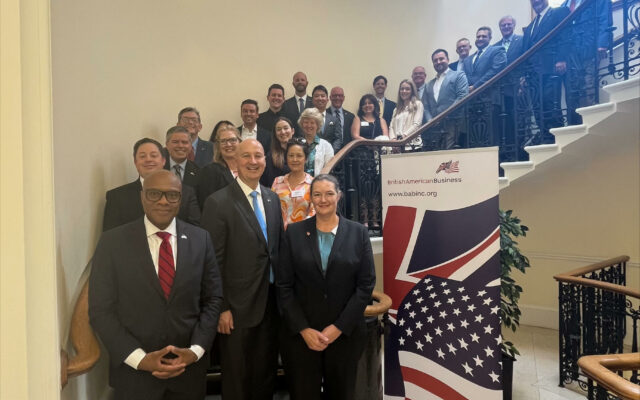 Gov. Ricketts (front and center in blue tie) and members of the Nebraska trade delegation at a meeting with The British-American Business Association earlier today in London.

On Monday, the trade delegation met with the Association of British Insurers to highlight Nebraska’s strength in insurance.  Since the United Kingdom exited the European Union in 2020 (Brexit), UK insurers have been looking to develop stronger relationships in the United States.  Nebraska Department of Insurance Director Eric Dunning and other key leaders from the state’s insurance industry are developing relationships with regulators and insurers in the UK during the trade mission to position Nebraska as a key partner with their insurance sector.

On today’s conference call, Malcolm Smith, VP of State Government Relations for AFLAC, shared his company’s great experience in Nebraska after having domiciled in the state about 20 years ago.  As part of the trade delegation, he is helping to advocate Nebraska’s responsive and fair regulatory environment to UK insurers looking to do business in the United States.  During his comments on today’s call, Gov. Ricketts reiterated the value of being able to promote Nebraska as an ideal place for UK companies to locate as they seek to expand product and service offerings across America.

While in the United Kingdom, the Nebraska trade delegation is working to reduce trade barriers.  On Tuesday, Gov. Ricketts met with Penny Mordaunt, the UK’s Minister of State for Trade Policy.  With bilateral trade talks stalled between the British and American federal governments, the UK has begun reaching out to individual US states.  In their meeting, Gov. Ricketts and Minister Mordaunt discussed ways to open up trade between Nebraska and the UK.

Growing Nebraska agriculture is another key priority of the trade mission.  During today’s conference call, Nebraska Farm Bureau President Mark McHargue talked about opportunities for beef and ethanol exports to the UK.  He said that Nebraska ranchers have been able to share their success reducing energy inputs, while increasing beef production.  The trade delegation met with the UK’s Department of Environment, Food, and Rural Affairs to tell the story of Nebraska agriculture.  They also dined at Goodman’s restaurant in London, which sells premium beef from Nebraska.

Gov. Ricketts added that the Nebraska delegation has been able to highlight advancements in ethanol—like carbon sequestration and the adoption of higher ethanol blends—to leaders in the UK.  Last year, the UK upped its ethanol blending requirement for all gasoline from 5% to 10%, generating demand for biofuels.  The Governor said Nebraska ethanol offers a great solution for consumers in the UK concerned about rising fuel costs and looking to reduce their carbon footprint.

Tomorrow, the trade delegation will meet with leaders of Haleon to thank them for doing business in Nebraska.  The company (recently spun off from GSK), is headquartered in central London, and it manufactures consumer healthcare products at a facility just east of Nebraska’s capital.

The Nebraska trade mission will continue Thursday afternoon in Ireland.