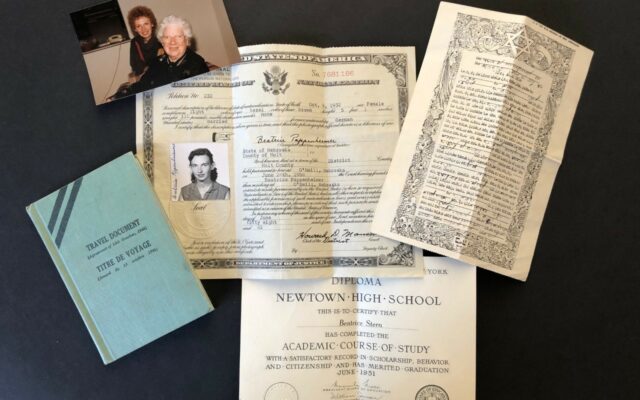 A number of items from the Bea Karp family are shown. These items were digitized for the project. (Courtesy UNL)

Lincoln, Nebraska, April 27, 2022 — As Nebraska lawmakers debated the future of Holocaust education in the state this spring, a team from the University of Nebraska–Lincoln developed a multidisciplinary digital humanities research project titled “Nebraska Stories of Humanity: Holocaust Survivors and World War II Veterans.”

The project features the stories of five Nebraskans who either survived the Holocaust or helped to liberate concentration camps and went on to share their experiences with friends, neighbors and schoolchildren throughout the state. The featured individuals are survivors Bea Karp, Hanna Rosenberg Gradwohl and Irving Shapiro and liberators Clarence Williams and Maurice Udes.

Led by doctoral candidate Beth Dotan in the Department of Teaching, Learning and Teacher Education, in collaboration with the Center for Digital Research in the Humanities, the portal went live April 26.

“The site tells their stories through letters, documents, photos, maps and other artifacts, all annotated and organized by individual,” Dotan said.

Interactive maps, along with full-text searchability, will help users explore the World War II experiences of these individuals.

According to Andy Jewell, professor in the University Libraries and co-director of the CDRH, millions of people have used the many digital projects developed by the center in its nearly 20-year history. Each project is different and presents its own opportunities and challenges.

“‘Stories of Humanity’ makes a distinctive contribution by gathering artifacts and narratives that capture the way the lives of our neighbors intersect in major world events,” Jewell said. “I think Beth’s approach will make these histories meaningful to learners in new ways, and I’m glad the CDRH has been a partner in the site’s development.”

For the past two years, Dotan and Laura Weakly, metadata encoding specialist in the CDRH, worked with a team of UCARE and Libraries students to scan, crop and organize almost 900 documents, photographs, postcards and letters. Students encoded the textual items according to the Text Encoding Initiative guidelines and entered metadata for objects and photographs into a spreadsheet.

This experiential learning has given the students a hands-on opportunity to improve their research and digital skills and gain a close familiarity with these historic individuals. The Undergraduate Creative Activities and Research Experience program supports Husker undergraduates to work one-on-one with faculty researchers.

Carrie Heitman, associate professor of anthropology in the School for Global Integrative Studies and associate director of the CDRH, and Gerald Steinacher, James A. Rawley Professor of History, have acted as advisers on the project. The CDRH team includes Karin Dalziel, Will Dewey, Sarita Garcia, Andy Pederson and Greg Tunink.

Another important project partner is faculty adviser and co-principal investigator Ari Kohen, Schlesinger Professor of Social Justice and director of the Norman and Bernice Harris Center for Judaic Studies, who said he is excited to see the release of this project to the greater community.

“This is one of those great examples of what the University of Nebraska is able to offer the public,” Kohen said. “This web portal of stories and artifacts will be available to everyone, and the digitized materials are not available anywhere else.”

In addition to the Husker team, a stakeholder group, led by organizations that have contributed information and materials to the project, has given education direction and a connection to the community.

“The stakeholders’ vision has given the site legs and connects us directly to donors who are members of their organizations,” Dotan said. “This networking is already resulting in new partnerships within and outside the university setting.”

Dotan said that future work on the portal will be devoted not only to expanding the collection with additional stories, but will focus on the educational components to support instructors and researchers utilizing the portal. They will construct models of inquiry to connect to Nebraska social studies standards requirements, newly adopted by the Nebraska Department of Education.

The Nebraska Legislature recently passed Legislative Bill 888, introduced by Sen. Jen Day of Omaha, which was signed by Gov. Pete Ricketts. The bill requires the State Board of Education to adopt standards for education on the Holocaust and other acts of genocide. In line with this new legislation, “Nebraska Stories of Humanity” will be a great resource for Nebraska teachers, students and the public interested in learning about the Holocaust