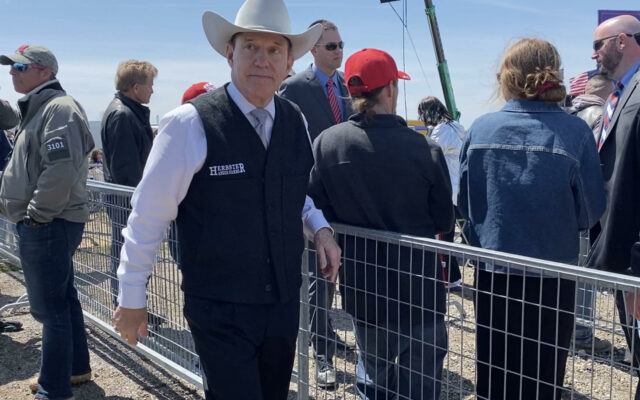 Charles Herbster arrives at the "Save America" Rally in Greenwood, NE on May 1st, 2022 (Photo by Elijah Herbel/KFOR)

OMAHA, Neb. (Nebraska Examiner) — Nebraska Republican Charles Herbster, after finishing second in the GOP governor’s primary race, is trying to reclaim his former role as a conservative kingmaker and mega-donor.

He and his team announced a new political action committee Thursday aimed at pushing state and local GOP officeholders and candidates farther to the right. The PAC is called “Nebraska First.”

“While I came up short in my bid to be our next Governor, I fully intend to remain active in fighting for the traditional Christian Conservative values our state and country were founded on,” Herbster said in a statement. “During my campaign, I talked about a lot of issues and ideas that resonated with voters. With Nebraska First, we want to make sure those voters have a voice in their government.”

Rod Edwards, a key member of Herbster’s campaign for governor, will lead the PAC. He said its focus will be Nebraska politics, state and local. They’ll start by prioritizing two issues.

The first question the new PAC will ask candidates for the Legislature is where they stand on the Unicameral’s unique system of electing committee chairs by secret ballot.

Herbster and the Nebraska Republican Party have advocated that those votes should be public so voters know who picked whom. Herbster has asserted that the Nebraska Constitution requires them to be public.

The longtime secret balloting in the officially nonpartisan Unicameral has made it possible for senators to back committee leaders from an opposing party.

The second issue is so-called “constitutional carry,” a measure that would allow Nebraskans to carry a concealed handgun without a state permit or background check.

State Sen. Tom Brewer of Gordon introduced a permitless carry bill during this year’s legislative session. It fell two votes short of passage. The PAC aims to press Republican senators from Omaha and Lincoln to support such a measure despite concerns from local police unions.

Herbster’s group intends to back conservative candidates who will value the 2nd Amendment, Edwards said. He said the PAC is willing to look beyond Republicans if needed to find supportive candidates.

The group plans to branch out to other issues soon, Edwards said. Its new website offers a set of principles the PAC expects candidates to support.

Most are themes that Herbster’s campaign emphasized, including opposing critical race theory. Edwards said the PAC will run educational ads for and against candidates on issues it supports.

The new group plans to file paperwork for the PAC this week with the Nebraska Accountability and Disclosure Commission. The group’s first fundraising and spending report is due Oct. 11. Because of its state and local focus, the PAC won’t legally be able to participate in congressional races.

Herbster, who is focused on fundraising, left open the possibility during his May concession speech that he might run for office again. He did not specify which office he might be interested in. He did not address that speculation Thursday.