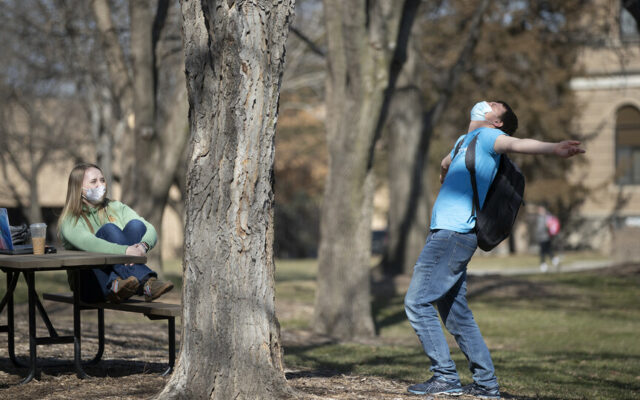 Lincoln, Nebraska (Feb. 21, 2022) — There’s been no need for snowsuits or snowblowers for much of Nebraska this winter, as temperatures have been more spring-like than cold and filled with fluffy white snow.

Despite a forecast for colder weather the rest of this week, University of Nebraska–Lincoln climatologists believe the trend of relatively warm temperatures is likely to continue for the next several months — which means this winter may go on the books as one of the mildest the state has ever seen.

Martha Shulski, Nebraska state climatologist and professor in the School of Natural Resources, said Nebraska is typically drier this time of year, as snowfall doesn’t always add up to much precipitation, but the past five months of fall and winter have been unusual. Nebraska is on the dividing line of the current La Niña weather pattern, which typically brings wetter, cooler weather to the north and drier, warmer weather to the south.

“Nebraska doesn’t have extremely strong tendencies with La Niña,” she said. “It depends on the route that the storm tracks take, and this winter, we’ve certainly been in the warm and dry sector of this pattern.”

The weather patterns have led to Nebraska experiencing historical weather conditions — along with some weird weather phenomena.

“We’ve certainly been much warmer and drier than normal,” Shulski said. “Fall was very dry, and December was the warmest on record. With that warmth in December, we did have the storm event that came through, which was certainly record-setting. We had 30 confirmed tornadoes in Nebraska, where previous to last year, we only had three confirmed tornadoes going back to the 1950s.

“The three-month period leading up to this time frame was the fifth warmest and third driest. It is certainly out of the ordinary in terms of the historical record, which goes back to about 1895.”

Just a year ago, February brought rolling energy blackouts to stave off grid pressure during record cold across much of the U.S., and a new record low temperature of -31 degrees was set in Lincoln on Feb. 16, 2021. In 2022, it is remarkably different.

“For over the last 30 years, we have seen a cooling trend in Nebraska, and much of the central U.S., in the month of February, and then we warm back up in March,” Shulski said. “This February is certainly not following that short-term trend that we’ve seen.”

While these conditions provide opportunity for outdoor recreation not usually available in winter months, and less stress on home and property owners, they’re also causing a problem that could hit agricultural producers’ outputs and cause homeowners headaches — drought. Currently, 91.2% of the state is experiencing drought, compared to 74% the week prior, with 14.09% in severe drought, according to the National Drought Mitigation Center. There seems to be no end in sight.

“The outlooks don’t look great in terms of precipitation,” said Shulski, who is also director of the Nebraska State Climate Office. “Spring and summer are typically our wettest time of year, but the three-month time period of February, March and April is projected to be drier than normal. What we want to see is at least average or above-average precipitation chances and that doesn’t look to be the tendency so far.”

Brian Fuchs, climatologist and faculty member in the National Drought Mitigation Center, said this is the driest Nebraska has been in nearly a decade, and that much of the western United States is experiencing a long bout of drought. The center publishes new drought maps for the entire United States each Thursday, based on data collected from across the country.

“Looking at the data, 2013, 2014 was the last time we saw a drought like this in the state,” Fuchs said. “We’d been in a fairly good period of time where drought wasn’t an issue. Going into the spring right now, with as dry as it’s been in the fall and now winter, this drought isn’t going to be alleviated any time soon.”

While enjoyable, the mild winter weather is also playing a role in drought conditions.

“Compared to last year, where it seemed like we just had snowstorm after snowstorm, this year has been quite the opposite,” Fuchs said. “When we do not have any snow on the ground, we continue to see moisture being lost throughout those dry, warm, windy days. Moisture that is in the ground continues to get lost through evaporation.”

With spring planting season on the horizon, Fuchs said many producers and resource managers are likely making decisions based on current drought conditions. They may switch the type of crops planted or prepare for a heavy irrigation season as soil moisture declines.

“That moisture is kind of a bank account for producers that their crops can tap into in periods where we don’t have rain, but also to establish the crop after planting,” Fuchs said. “The last few years, we haven’t had a lot of irrigation because we’ve had timely rains. This year, I think water providers for irrigation districts are probably going to need to be ready to push out that water that irrigators are going to be using.

“It is also going to start impacting our cattle production, with grazing and pasture lands in the state. Without adequate moisture, they don’t get good forage growth. Those producers are going to be looking at hay reserves that they have on their farm or ranch, how many head they’re keeping, as well as possibly buying feed on the open market, which becomes expensive for them. I looked at cattle numbers, and it appears they’re already down across the country.”

But since it is Nebraska, the weather patterns could change tomorrow, Fuchs said, and he’s hoping that turns out to be true.

“I don’t want to be all doom and gloom,” he said. “We can go into spring and we can have a change in our weather pattern and have adequate moisture, and we could see conditions improve. Unfortunately, we just aren’t seeing too much of that right now in the longer-term outlooks.”