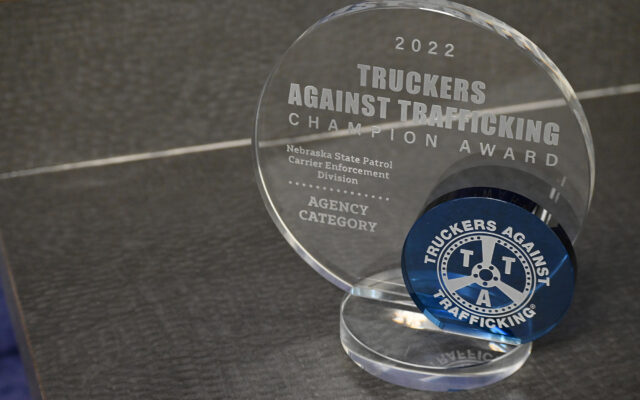 “We wanted to honor a law enforcement partner who took on the TAT mission, made it their own, and innovated in ways we had not seen done before,” said Lanier, “When NSP first decided to partner with Truckers Against Trafficking, you guys did not dip your toe in the water. You went all-in from the very beginning.”

“This partnership, with the trucking industry and specifically Truckers Against Trafficking, is there to build awareness, to provide intervention, and to rescue victims of human trafficking,” said Colonel John Bolduc, Superintendent of the Nebraska State Patrol. “We are extremely proud of our Carrier Enforcement Division troopers, investigators, and support staff for their relentless work and the valuable partnerships they’ve developed in this important mission.”

Truckers Against Trafficking is an international organization that has brought numerous industries together in the fight against human trafficking, including law enforcement, transportation, and energy partners. The Nebraska State Patrol Carrier Enforcement Division has partnered with TAT for several years on initiatives including educational programs, public awareness efforts, and investigational operations.

Any business or organization wishing to partner with Truckers Against Trafficking can reach them via email at [email protected], by calling 612-888-4828, or by visiting TruckersAgainstTrafficking.org.