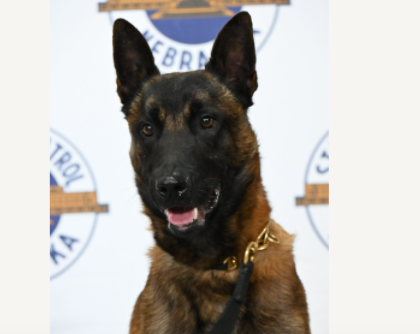 Tilt, the new State Patrol K-9 that will work in the Lincoln area. (Furnished by Nebraska State Patrol)

NOVEMBER 24, 2021 (LINCOLN, NEB.)  — The Nebraska State Patrol is introducing the newest police service dogs serving Nebraska with a calendar that is available to the public. NSP has added five new K9s in 2021.

“Our Police Service Dog Unit does phenomenal work across our entire state,” said Captain Jason Scott, Commander of the NSP Special Operations Division. “With so many new faces in the unit, this is a great way to introduce them to the public and to also say thank you to the NSP Foundation for their financial support of our K9 program.”

The newest dogs of the NSP PSD unit are:

Gable – Belgian Malinois, based in Omaha

Havik – Belgian Malinois, based in Columbus

Tilt – Belgian Malinois, based in Lincoln

Four of these five dogs have already gone through training and certification and are already serving throughout Nebraska. The final new addition in 2021, Tilt, is going through those steps right now. The NSP PSD unit trains and certifies NSP K9s, as well as K9s for many agencies across Nebraska and Iowa, at the NSP Training Academy in Grand Island.

All NSP K9s are purchased by the Nebraska State Patrol Foundation, which utilizes generous donations from the public to support NSP’s mission in multiple ways each year.