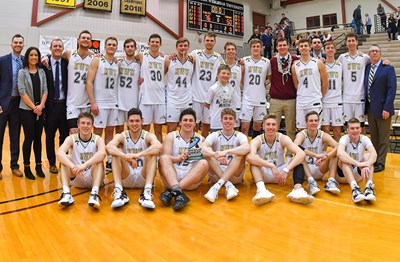 Nebraska Wesleyan led the entire game thanks to stellar defense holding Coe to just 50 points after they scored 103 in the tournament semifinals.  The Kohawks shot only 35.2 percent for the game, making 9-34 from 3-point range.  The 50 points scored were a season-low for Coe College by eight points.

In his first career start in a Prairie Wolves uniform, senior Cordell Gillingham came out firing in the first half scoring 12 points to lead NWU.  Gillingham scored a career-high 19 points making 7-10 from the field and 3-5 on his 3-point attempts to lead the Prairie Wolves in scoring.

NWU jumped out to a quick 19-7 lead in the first half ten minutes into the game.  Coe came storming back scoring 10 straight points to pull within two points.  That was as close as they could get with NWU taking a 35-25 lead into halftime.

In the second half the lead stayed around 12-15 points for the first nine minutes of the half, then the Prairie Wolves began to pull away.  NWU used a 13-2 run to get up by 25 points with just over five minutes remaining and the celebration was about to begin.

As a team the Prairie Wolves made only 41.0 percent of their field goal attempts, but they were able to hit 12-30 from 3-point range.  A big difference was on the glass where NWU held a +18 margin in rebounding (46-28) getting 15 offensive boards.

NWU, which beat Coe by only six points each time in the regular season, was able to post the 26-point win playing without leading scorer Nate Schimonitz who was sidelined with an injury he suffered late in the semifinals.

10th-ranked Nebraska Wesleyan moves to 24-3 on the season and it marks the 99th victory over the past four years by the senior class.