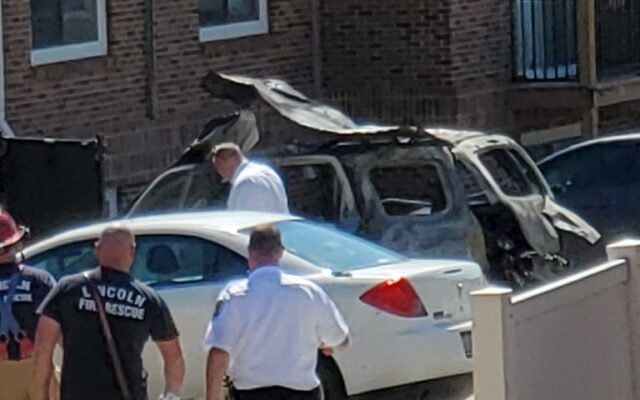 The scene of a vehicle explosion outside the Superior Place Apartments near 14th and Superior on Monday, Sept. 12, 2022. (Charlie Brogan/KFOR News)

LINCOLN–(KFOR Sept. 12)–  Lincoln Police tell KFOR NEWS a 74 year old man, whose name has not been released, died outside his burning SUV late Monday morning in the parking lot of a north Lincoln apartment.  For medical reasons, the victim had oxygen tanks inside the SUV parked at the Superior Place Apartment complex east of 14th and Superior.  A fire started inside the vehicle, igniting an oxygen tank, causing an explosion and fire.  It hasn’t been determined what started the fire.

ORIGINAL STORY (9/12/22)  One man is dead after being found following a reported car fire late Monday morning outside a north Lincoln apartment complex.  Lincoln Fire and Rescue, along with Lincoln Police, were called to the Superior Place Apartment complex east of 14th and Superior about an explosion and fire involving a vehicle in the lot.  Crews found the deceased man shortly after getting to the scene.  His identity is not known at this time.  KFOR News found out from LPD at the scene that they aren’t sure yet in their investigation if this is a criminal matter or not.