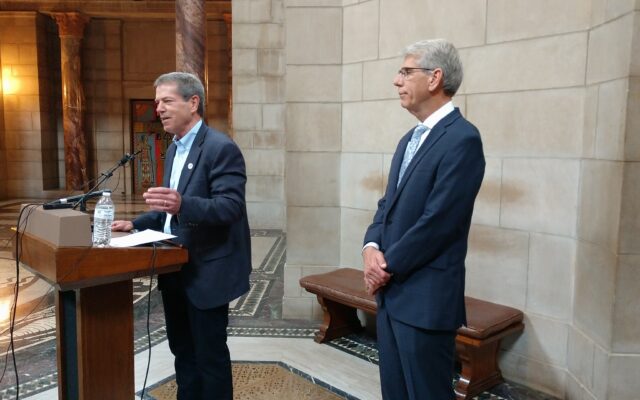 “Joe Kelly has dedicated his career to enforcing our laws, pursuing justice, and serving the people of Nebraska,” said Pillen. “As his friend for over 40 years, I know Joe to be a leader of the highest integrity who gets results and always puts service before self. I can think of no better governing partner to help me lead our great state and pursue our conservative agenda.”

“Jim Pillen has a clear, principled, conservative vision for our state’s future, and he has the skill and experience to make it a reality,” said Kelly. “I’m honored to serve as his running mate, and I’m excited to get to work.”

After the announcement, Kelly was asked whether he is comfortable with Pillen’s decision not to participate in debates.

“It’s the perfect fit for him because Jim Pillen, shaking a hand or looking somebody in the eye gives a much better chance of a vote coming his way than Jim Pillen with a lot of other candidates saying essentially the same thing on a stage.”

“Jim and Pillen Family Farms have done way more than is required by law to assure that they’re doing this legally, and that they don’t do any of those things that have been alleged.  There’s just no truth to those matters.”

Joseph P. “Joe” Kelly has served  as a Deputy, Chief Deputy, and Lancaster County Attorney, U.S. Attorney, and currently serves as Criminal Bureau Chief in the Office of the Attorney General of Nebraska.

Kelly will complete his duties in the Office of the Attorney General on Friday and will begin an unpaid leave of absence to join the Pillen campaign full time.