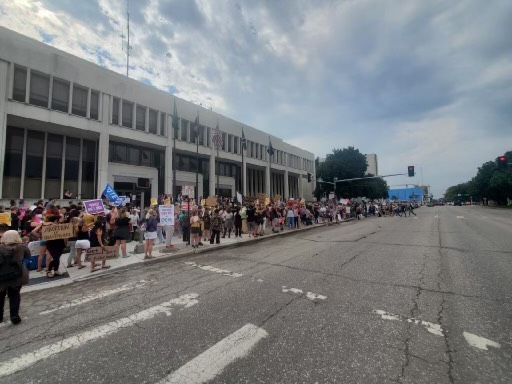 A crowd gathers in front of the Hall of Justice in downtown Lincoln on Friday afternoon in opposition to the United States Supreme Court's ruling to overturn Roe vs. Wade. (Photo Courtesy of Melody Vaccaro).

LINCOLN—(KFOR June 24)—Hundreds of people gathered in front of the Hall of Justice in downtown Lincoln late Friday afternoon, rallying in protest to the U.S. Supreme Court’s decision to overturn Roe vs. Wade, which provided a constitutional right to abortion.

The decision by the nation’s high court has sparked similar rallies across the country.

Most of the people gathering lined up both sides of 10th Street from “H” Street to “K” Street, while vehicles drove by honking horns as supporters gathered to demand Nebraska’s elected officials to protect the right for a woman to have an abortion.

It’s legal to have an abortion in Nebraska for up to 20 weeks.  Friday’s Supreme Court decision, though, could trigger a special session of the Nebraska Legislature to consider a law that would ban abortions in the state.  No time frame has been set yet by Governor Pete Ricketts, on when the session could happen.

States like Missouri, Wyoming and South Dakota have passed trigger legislation designed to become law, once the high court made the decision.  Nebraska’s attempt to do the same thing last session fell a few votes short.