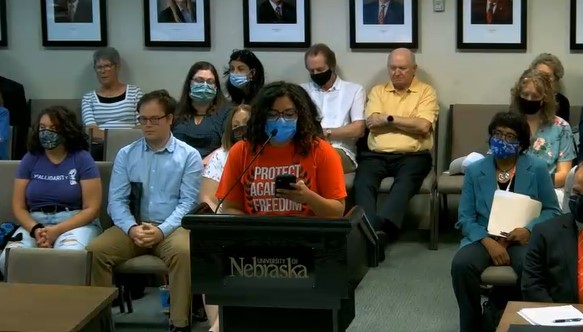 Regents listen to over 2 hours of public testimony before Friday's vote.

Lincoln, NE (August 13, 2021) — The University of Nebraska Board of Regents took a vote 9-3 today, rejecting a proposed resolution regarding Critical Race Theory (CRT). The resolution, sponsored by Regent Jim Pillen, was set to ban the imposition of critical race theory on students, but distinguished that discussion of CRT would not be banned. Pillen sees the resolution’s goal as, “to prevent this institution from imposing extreme ideologies, and a majority of fellow Nebraskans find to be discriminatory, divisive, and the polar opposite of how we live in the values of Nebraska.”

The Board engaged in 3-plus hours of public testimony, where several opposing opinions were voiced by fellow Regents. Regent Tim Clare viewed the resolution as an overreach of The Board’s authority, “Our role as a board is one of governance, not of management, and I believe this resolution crosses that line. Discounting the collective expertise of the President and Chancellors, the leaders that we’ve selected to run and manage our campuses.”

While Regents Paul Kenney of Kearney and Rob Schafer of Beatrice joined Pillen in voting for the resolution, UNO student Regent Batool Ibrahim, viewed the rejection of CRT teachings as a rejection of history, “—you’re telling me that my history does not belong in the classroom, you’re telling the black students that go to The University of Nebraska system that their history should not be taught in the classroom.”