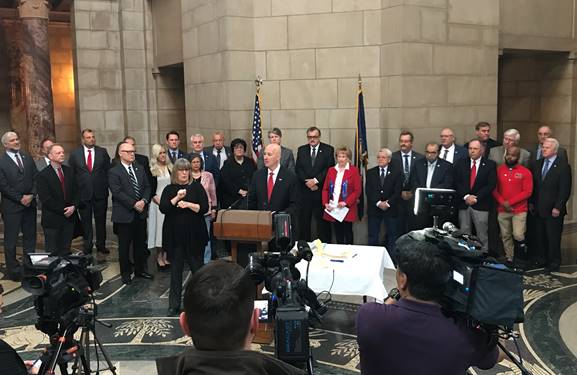 “Today, we enacted historic tax relief legislation for Nebraska,” said Gov. Ricketts.  “LB 873 is the biggest tax relief package in state history.  It will provide 12 times more annual tax relief than any tax bill passed in any prior administration.  Senior citizens, families, ag producers, and small businesses will see major tax savings in the coming years as a result of LB 873.  Thanks to everyone who supported this historic tax relief package.”

Tax relief has been Governor Ricketts’ number one legislative priority since taking office in 2015.  In previous years, he worked with the Legislature to deliver over $4 billion of property tax relief.  LB 873 will provide an additional $3.4 billion of overall tax relief to Nebraskans through tax year 2027.  When fully implemented, LB 873 will deliver nearly $1 billion of annual tax relief above and beyond what Nebraskans currently receive.

The Governor credited the State’s spending discipline for making it possible to deliver record amounts of tax relief.  Over the past eight years, Gov. Ricketts has worked with the Legislature to control annual average State spending growth to 2.7%.  The State’s stewardship of taxpayer dollars has helped Nebraska rank as the least indebted state government in the nation according to Moody’s Investors Services.