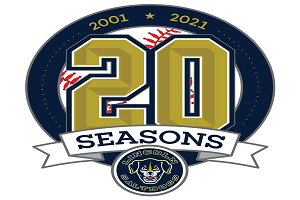 ROSEMONT, Illinois – After the Lincoln Saltdogs (47-42) and Chicago Dogs (57-32) were postponed due to inclement weather Tuesday, the teams played a split, seven-inning doubleheader Wednesday. Chicago took the first game, 7-1, and the Dogs took Game 2, 4-3.

Game 1: Drew Devine picked up his first hit as a professional, but Chicago scored four times in the 3rd inning and the Saltdogs lost Game 1, 7-1, on Wednesday afternoon.

Devine, signed out of Western Michigan University ahead of first pitch, came in as a defensive replacement in the 6th before singling in his first professional at-bat in the 7th.

The Saltdogs fell behind 1-0 on a throwing error in the 2nd inning, but Justin Byrd hit into a double play with runners on the corners to tie the game in the 3rd.

Chicago score three times on back-to-back homers in the bottom of the 3rd – a two-run shot from K.C. Hobson and a solo homer from Anfernee Grier – and Chicago later added a run on Grant Kay’s RBI double. The ‘Dogs scored two more in the 5th and held on for their sixth consecutive win.

Game 2: Josh Altmann hit his 23rd homer of the year, but the ‘Dogs couldn’t overcome an early deficit in a 4-3 loss in the second game of the doubleheader.

Altmann’s two-run homer came in the three-run 4th inning, and David Vidal later added a solo homer to make it a one-run game.

Chicago took a 4-0 lead in the 2nd. T.J. Bennett opened the scoring with an RBI single before Michael Crouse made it 2-0 with a two-out RBI single and Anfernee Grier doubled the lead with a two-out, two-run single.

The ‘Dogs now return home to open an 11-game homestand to close the regular season. First pitch of a four-game series against Cleburne is scheduled for 6:05 p.m., and coverage will begin at the conclusion of Hail Varsity radio on ESPN Lincoln 101.5 FM/1480 AM.