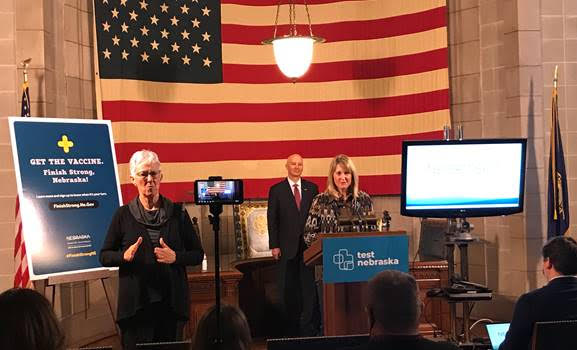 Sarah Sortum (podium) of Switzer Ranch and Gov. Ricketts (in back of podium) at Leopold Conservation Award ceremony at the State Capitol.

LINCOLN, NE (April 21, 2021) – Governor Pete Ricketts has announced that Switzer Ranch of Loup County has been selected as the recipient of the 2021 Nebraska Leopold Conservation Award®.  Given in honor of renowned conservationist Aldo Leopold, the prestigious award recognizes farmers, ranchers, and forestland owners who inspire others with their dedication to land, water, and wildlife habitat resources in their care.

“Nebraska’s farmers and ranchers are the original conservationists,” said Gov. Ricketts.  “About 97% of land in Nebraska is privately owned, and conservation efforts are most effective when initiated by private landowners.  The responsible land ethic of our multi-generational farm and ranch families has helped us grow the food we need to feed the world.  We’ll continue to support our farmers and ranchers here in Nebraska, while resisting the Biden Administration’s intrusive plan to place 30% of our land and water under federal restriction by 2030.”

Bruce and Sue Ann Switzer along with their children, Sarah Sortum and Adam Switzer, own and operate Switzer Ranch.  They were announced as the Leopold Conservation Award recipients by Gov. Ricketts in advance of Earth Day.  The Switzers will be presented with the $10,000 award during a ceremony honoring them later this year.