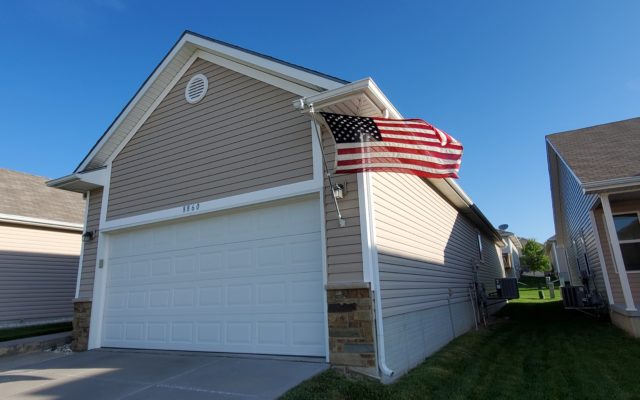 A U.S Flag unfurled in a brisk breeze at a northeast Lincoln home on June 6, 2021

LINCOLN, NE (June 8, 2021)- Secretary of State Bob Evnen reminded Nebraskans today to plan to fly the U.S. and Nebraska flags on National Flag Day, next Monday, June 14th.  Flag Day originated in 1885 to observe June 14th as the anniversary of official adoption of the stars and stripes. Enthusiastically called “Flag Birthday,” Flag Day was celebrated by school children who would assemble to be given a small Flag.  “Flags are a reminder of the freedoms we enjoy as American citizens and Nebraskans” Secretary Evnen said, “a symbol of ourselves.”

“The red stripes proclaim the fearless courage and integrity of Americans. The white stripes stand for liberty and equality for all, the blue is the blue of heaven, loyalty, and faith. I represent these eternal principles: liberty, justice, and humanity… ever known as Old Glory. Guard me well lest your freedoms perish.”  – “I am the Flag” written by Ruth Apperson Rous.

The Office of the Secretary of State in cooperation with the Office of the Capitol Commission offers a service that provides Nebraskans an opportunity to request to have a flag flown over the State Capitol. Flags meeting dimensional and other requirements must be provided to the Secretary of State’s office with information about when, why, and for whom the flag is requested to be flown.

Flags are flown Monday through Friday, except for holidays.  Each flag will be accompanied by a keepsake certificate signed by Secretary Evnen and will include the date and the purpose of the flight.

Nebraskans who wish to have a flag flown over the Capitol should call (402)471-4070 or email [email protected] for additional information. The Secretary reserves the right to approve all requests.