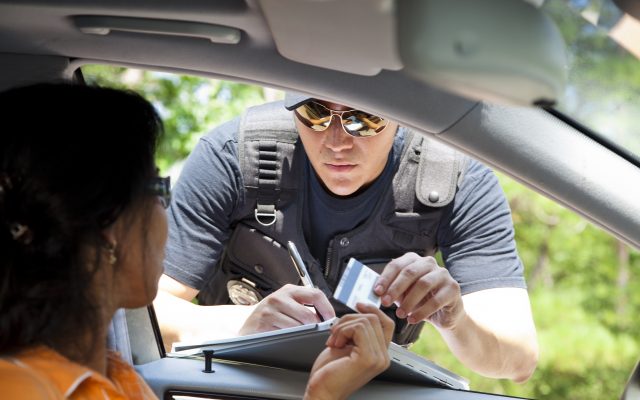 Policeman stops woman driver to give her a traffic ticket for speeding. He takes her driver's license.

In an effort to help impact motor vehicle accidents, intoxicated driving and deter overserving, the Lincoln Police Department will be conducting a special detail throughout Wednesday. The objective is to reduce the number of motor vehicle accidents and DWI violations while helping to promote responsible sales & service of alcoholic beverages in licensed liquor establishments throughout the city.

Extra officers will be added to each of Lincoln’s five geographic police teams. They will be conducting alcohol compliance checks at various licensed liquor establishments in each team area. When that detail is complete, the officers will conduct a high visibility traffic enforcement with emphasis placed on traffic and DWI violations.

The State Patrol will join numerous law enforcement agencies across Nebraska and throughout the country in urging everyone to have a sober driver on St. Patrick’s Day.

“Safe driving is never about luck. It’s about making wise decisions,” said Colonel John Bolduc, Superintendent of the Patrol. “If you’re celebrating this St. Patrick’s Day, don’t leave your ride home up to chance. Designate a sober driver or get a ride share to avoid driving impaired.”

The effort will include high-visibility patrols throughout the state in an effort to reduce serious injury or fatality crashes. This enforcement effort is made possible by a grant for overtime from the Nebraska Highway Safety Office.