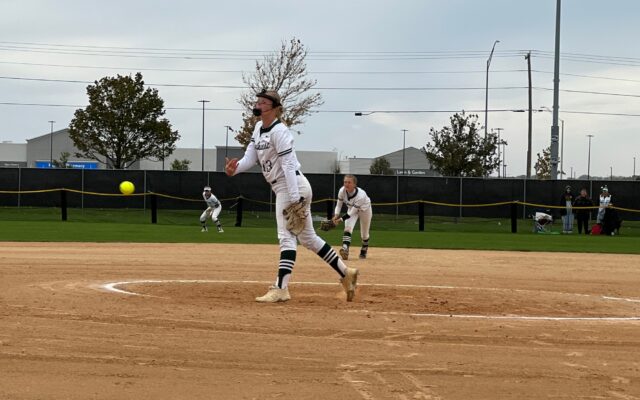 Lincoln Southwest pitcher Samantha Bank delivers a pitch against Omaha Marian on Wednesday afternoon in the opening round of the Class A State Softball Tournament at the Smith Complex in Hastings. Southwest fell 8-0 in 6 innings. (Rob Kelley/Alpha Media Lincoln)

HASTINGS–(KFOR Oct. 12)–Four Lincoln area teams are now facing elimination at the NSAA State Softball Tournament, after three posted opening round losses, while another won their first ever opening game of the tournament before falling into the elimination bracket.

Lincoln East, who was the 2021 Class A runner-up, had never won an opening round game at State before Wednesday afternoon.  The Spartans prevailed 12-8 over Millard North and advanced to face top-seed Gretna, where the Dragons earned an 11-1 win in four innings.

In the first game, East’s Rhiannon Martin hit a two-run homer to break a 5-5 ballgame in the top of the fourth against Millard North.  Junior Sydney Walz hit a solo home run in the next at-bat, while Kooper Barnes and Gabby Pace each homered and Addi Bliemeister connected on a single.

In Class B,  Waverly rallied back from a 6-0 deficit to score four runs but came up short in Wednesday morning’s 6-4 loss to Blair.  The Vikings play Elkhorn in the 9am Thursday elimination game.

In Class C, Central City was able to break free for an 11-3 win over Malcolm.  The Clippers now face elimination when they play Milford at 9am Thursday.