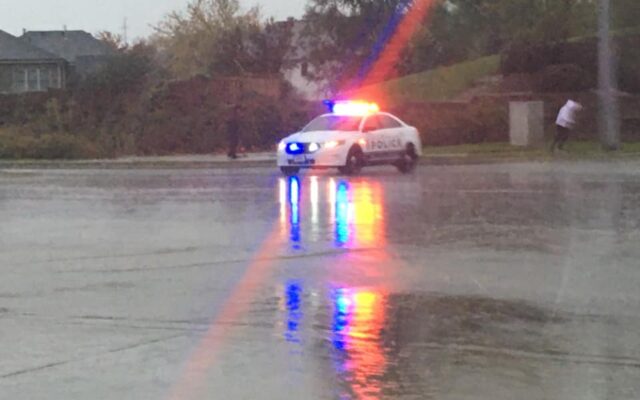 A Lincoln Police cruiser blocks off southbound traffic along 84th Street at Windmill Drive, just south of Adams Street. The roadway had water from heavy rainfall moving across it at the time. (Jeff Motz/KFOR News)

LINCOLN–(KFOR Oct. 24)–Strong thunderstorms brought heavy rain over much of the Lincoln metro area on Sunday afternoon, including as much as 4 to 6 inches of rain in portions of northeast Lincoln, according to reports from some KFOR listeners.

It did cause flooding in those areas, including southbound 84th Street being shutdown from just south of Adams Street, after water was moving over the road. One motorist had to abandon their car as a result. There are likely some folks still cleaning up soaked carpets in some basements in the area.

The storms also had a lot of lightning and one bolt hit a home in the area of 90th and Adams early Sunday afternoon. Lincoln Fire and Rescue says crews were called to a home near Marty Drive and Trader Drive around 12:45 p.m., where they discovered the fire inside the attic area once they made entry. Crews couldn’t get on the roof to cut holes in it, so that the house could be properly ventilated.

As a result, lots ceiling on the second floor of the home had to be pulled to get to the fire. Right now, LFR says the amount of damage done to the home is anywhere between $50,000 to $75,000. No injuries have been reported at this time.